Solid state transformers (SSTs), also referred to as power electronic transformers (PETs), are evolving into a smart technology that can play a crucial role in smart grids and the power network. SSTs consist of a series of high-powered semiconductor modules, traditional high frequency transformers and associated control circuitry that provides a high degree of versatile control over the power distribution network. SSTs are more complex than a traditional transformer, but can be smaller and more powerful since they operate at high frequencies. SSTs can be made of simple AC-to-AC conversion modules or they can contain AC-to-DC-to-DC-to-AC conversion stages. Electrical isolation in an SST is provided by a transformer present in the AC-to-AC stage or DC-to-DC stage that carries full power. Furthermore, when communication capability is added to SSTs, they become ‘smart’ and can prove to be a valuable addition to the ever-progressing smart grid technologies.

William McMurray first suggested the concept of SSTs as high-frequency AC/AC power converters in 1970. However, the first proper implementation of SSTs was proposed by J.L. Brooks in 1980. He proposed an SST for naval systems based on AC/AC buck boost converters and AC/AC buck converters. In 1999, a patent reported the use of SSTs as a distribution transformer. From 2000 onward, SSTs have been the subject of many studies that explore their potential as power electronic distribution transformers. High-performance power converters with advanced controllability are becoming important with the increasing demand of medium level interfacing of AC and DC voltages. Consequently, the last two decades have seen remarkable progress in SSTs and they are considered top candidates for replacing conventional low frequency transformers in certain applications. For instance, in traction systems, SSTs can achieve substantial improvement in efficiency while significantly reducing weight and volume. Similarly, SSTs are an attractive option for smart grid application as they are versatile and controllable. Furthermore, integration of renewables and energy storage systems into the grid can become easier and more efficient with the help of SSTs. 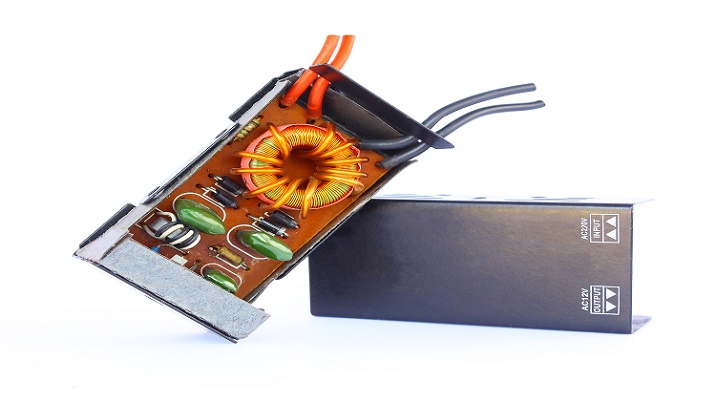 An important characteristic of SSTs is that they are connected to medium voltage (MV) levels unlike typical power electronic converters that usually operate at low voltage (LV) input. This is important, considering their application in the smart distribution network. A typical SST usually consists of a power electronic interface and an isolation transformer operating in the MF range. Increasing the transformer operating frequency reduces its weight and volume without increasing the current density in the winding or the maximum core flux density. This is an attractive option for traction applications where space and weight options are limited. Furthermore, high frequency can aid in harmonic filtering and provides other benefits for a smart distribution network as well, even if space and volume are not issues. Third, unlike a typical transformer, an SST is controllable, which enables its input voltages and output voltages and currents to be regulated and it protects both the load and the power system from disturbances.

One of the most significant benefits of an SST is its reduced weight and volume. This has opened doors for its use in many applications, such as traction. Reduced weight and size make SSTs an attractive option in traction systems. Furthermore, SSTs provide a greater degree of flexibility and control. For instance, they can be used with wind energy systems to control voltage fluctuations. They can also eliminate the need for reactive power compensators and they can suppress voltage fluctuations. In electrical distribution networks, SSTs can serve multiple purposes. They can be used to solve voltage sag problem and perform voltage compensation. They can also play a role in fault isolation and improve power factor. With smart communication technologies, they can become an important player in smart grids and demand side management. Moreover, SSTs have the capability of interfacing asynchronous loads and grids. They can interface a system running on 50 Hz to a system running on 60 Hz.

SSTs have come a long way since the 1970s. However, the technology is not mature enough yet to be used widely. Over the years, many companies have patented their technologies, which are consequently being used in specific industries. Power distribution networks remain the prime candidate for SST applications and transitions to smart grid and smart energy management systems will benefit greatly from them. SSTs can be integrated in the current power infrastructure without any major changes or replacements. Many companies, including General Electric Co., U.S.; Mitsubishi Electric Corp, Japan; Schneider Electric, France; and Siemens AG, Germany, are working on SSTs. According to one study, the growth rate of the SST industry is expected to rise globally at the compound annual growth rate (CAGR) of 21.7% in the years 2019 to 2027. Europe is expected to be leading the industry at a CAGR of 23.4%.

The SST field is expected to advance in the near future; however, certain aspects still need thorough research. For instance, real-time communication between SSTs within a network is not a mature technology yet, but it is important for ensuring power system stability. Furthermore, satisfactory literature does not exist on SST implementation in four-wire distribution systems. Protection, reliability and lifetime cost analysis of SSTs are other aspects that need further attention. Nevertheless, the progress in the SST industry is remarkable and promising enough to hope for widescale use in the near future.