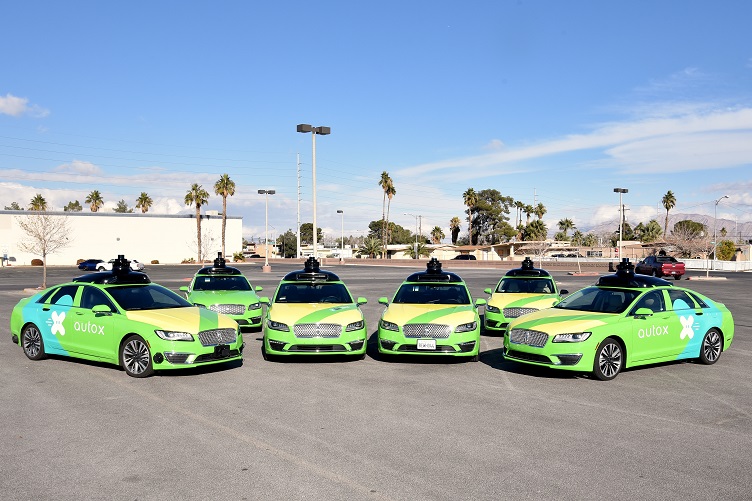 AutoX showcased its autonomous vehicles at CES in recent years with its green fleet and will now bring its technology to the streets of Shanghai. Source: AutoX

Following an agreement with Shanghai’s municipal authorities, AutoX will use a fleet of 100 robotaxis in Shanghai’s Jiading District. The goal is to expand the robotaxi service to more cities in China and AutoX is already testing self-driving vehicles in Shenzhen, Wuhan, Wuhu and other cities globally. AutoX told Electronics360 the robotaxi service will launch in these cities in the next few months.

“AutoX is also expanding to other regions outside China, such as Southeast Asia,” said Jewel Li, COO of AutoX. “The data AutoX has accumulated and the technology AutoX has built are capable of handling downtown scenarios, especially cities in Asia. This gives us a lot of advantages when it comes to regions with similar traffic.”

The company developed its robotaxis using proprietary hardware- and software-integrated full-stack Level 4 self-driving technology called AI Driver. The hardware includes a vehicle control unit called XCU, the central computer for the Level 4 autonomous system, and sensors with purpose-built cameras, 4D radar and lidar sensors. AutoX struck a deal with Alibaba to use its AutoNavi smartphone app in order for users to hail the robotaxis. AutoNavi is currently used in China for other non-self-driving ride-hailing services.

“The philosophy is to build all that’s necessary in terms of creating the safest Level-4 Driver and integrate hardware that’s available that can meet our standard,” Li said.

Additionally, AutoX has struck a partnership with Letzgo, a taxi fleet operations company in Shanghai. Under the agreement, AutoX self-driving robotaxis will be able to be hailed through the Letzgo smartphone app once the service is fully rolled out on its networks.

Letzgo operates 16,000 vehicles in 18 cities in China and its staff will be trained on how to operate the AutoX robotaxis. Once trained and the service available in the app, the robotaxis will be part of Letzgo’s daily fleet operations.

Robotaxis in the COVID-19 era

The outbreak of the COVID-19 pandemic has changed how people interact with social distancing and the goal to maintain contactless interactions as much as possible.

Li said robotaxis are a prime tool to be used during the pandemic as users only need to say the last four digits of their cellphone number through a voice recognition system when entering the vehicle to start a journey in a robotaxi. During the trip, passengers can monitor the progress through an internal screen and see what the vehicle identifies around it.

“The AutoX Driver is created for many types of vehicles and use cases, including robotaxi, robodelivery, and robotruck,” Li said. “We view RoboTaxi as the future of mobility, especially given the COVID pandemic. For highly populated regions like China, safe and contactless RoboTaxi is a better solution.”