Researchers from Washington State University and St. Louis’ McKelvey School of Engineering combined AI with systems theory to create a system that can detect epileptic seizures in real-time. It could one day be developed to create a wearable that can stop an epileptic seizure in its tracks, similar to a diabetic’s insulin pump. 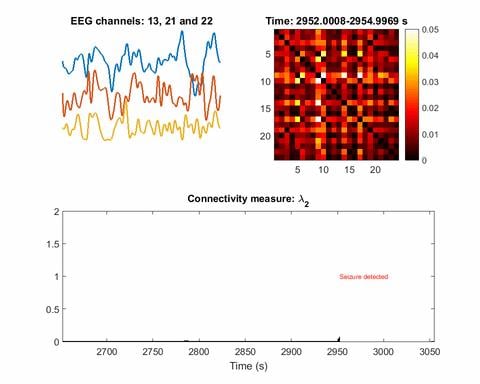 This gif was recorded during two seizures, one at 2950 seconds, the other at 9200. The top left animation is of EEG signals from three electrodes. The top right is a map of the inferred network. The third animation plots the Fiedler eigenvalue, the single value used to detect seizures using the network inference technique. Source: Li Lab

When a person has a seizure while hooked up to an EEG machine, abnormal brain activity is presented as amplified spike and wave discharges. Detection accuracy is not great with temporal EEG. The new network inference technique can detect a seizure and accurately pinpoint its location.

The team used EEG electrodes as nodes of the network. Recordings of each node infer time-varying connections in the network between nodes. The sum of relationships forms the network. This technique considers relationships and the EEG data, something that has not been done before.

Networks measure parameters holistically. A parameter that was particularly helpful in this research is the Fiedler eigenvalue. This parameter is related to the network’s synchronicity. The bigger the value, the more synchronous. This agrees with the theory that brain activity is synchronized during a seizure.

Bias toward synchronization helps eliminate artifact and background noise. The network structure inherently reduces the importance of unrelated signals. Only the brain activities in sync cause an increase in the Fiedler eigenvalue.

The new system currently only works for individuals. Next up the team is looking at how to integrate machine learning to generalize the technique for identifying different types of seizures across patients. The team aims to use the various parameters that characterize the network to train the machine learning network. This works the same way that facial recognition software generalizes from examples to recognize any face. Network theory find similarities in specific parameters associated with specific networks. In this case, the network corresponds to kinds of seizures.

One day patients could wear the network in a device similar to an insulin pump. As neurons synchronize, the device delivers medication or electrical interference to stop the seizures. But before this can become a reality, the team needs a better understanding of neural networks.

A paper on this research was published in Scientific Reports.