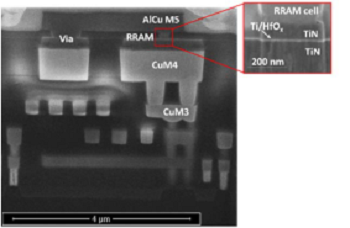 SEM cross-section of the RRAM cell monolithically integrated on the top of 130 nm complementary metal-oxide-semiconductor. Source: Leti resistance across a dielectric solid-state material.

The research work presented at the 2019 IEEE International Electron Devices Meeting, held Dec. 7 to 11 in San Francisco, measured a five time reduction in energy use compared to an equivalent chip using formal coding. The neural network implementation is made such that synapses are placed close to neurons, which enables direct synaptic current integration.

"The entire network is integrated on-chip," said Alexandre Valentian, lead author of the paper, "Fully Integrated Spiking Neural Network with Analog Neurons and RRAM Synapses." "No part is emulated or replaced by an external circuit, as in some other projects. It even was used in a live demo where users could draw digits with their finger on a tablet and it is classified after conversion into a spike train."

Spiking neural networks, also known as third-generation neural networks, are composed of bio-inspired neurons, which communicate by emitting spikes, discrete events that take place at a point in time, rather than continuous values. These networks promise to further reduce required computational power because they use less complex computing operations, for instance additions instead of multiplications. They also inherently exploit sparsity of input events, since they are intrinsically event-based.