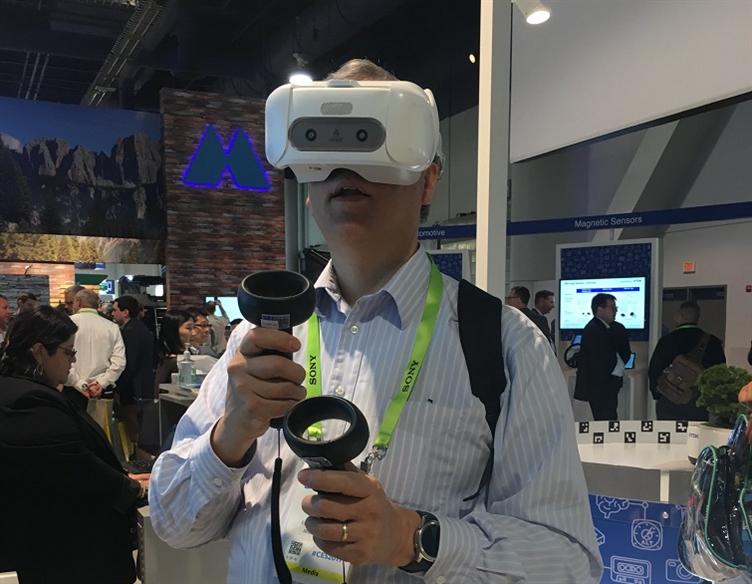 An attendee at CES 2019 checks out the Chirp SonicTrack solution incorporated into the HTC Vive. Source: TDK Corporation of America

A number of VR-related announcements were made by TDK Corporation this past week during CES 2019 in Las Vegas.

Announcements include the launch of a portfolio of sensors and technologies to enable the next generation of all-in-one VR platforms. The portfolio includes:

TDK noted that the key sensor requirement for any VR system is precise alignment between the HMD and handheld controllers. To immediately render changing VR scenery, motion ranging from slight head movement to extreme hand movement needs to be measured quickly and accurately. Small misalignments can severely impact the user experience and eventually lead to motion sickness.

The developer kit of HTC’s Vive Focus all-in-one VR system is the first VR system to use the Chirp SonicTrack solution. The technology enables VR system providers to incorporate their own 6-DoF controllers into 3-DoF designs by adding the tiny CH-101 ultrasonic transceivers that power SonicTrack. The small size of the transceivers offers industrial design options, and the SonicTrack sensor fusion software library is ready for use on Qualcomm Snapdragon and other mobile processors.

“Mobile VR is the future of VR,” added Hugo Swart, senior director at Qualcomm. “We live in a 3D space and move about with 6-DoF motions…you need to have not only a 6-DoF headset, but also 6-DoF controllers to interact with the environment for an immersive experience.”

Swart added that “VR isn’t the end of the story,” raising the possibility that VR and AR ultimately could converge into “sleek, fashionable extended reality sunglasses.”

While acknowledging that this vision may take several years to come to fruition, Swart said that he anticipates more than 40 million units — AR, VR or XR devices — to be shipped annually within the next five years.