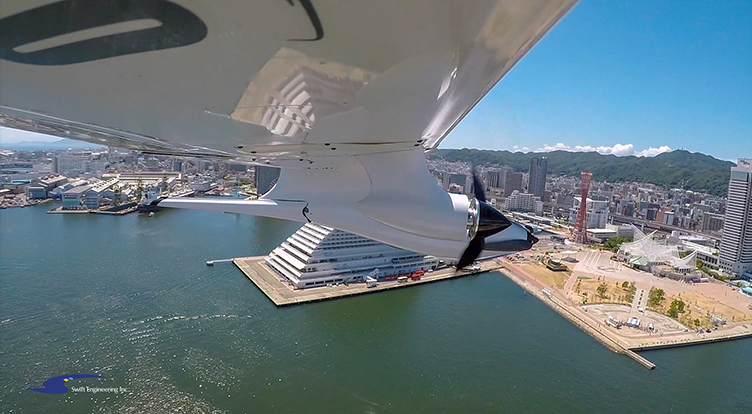 A demonstration featuring a vertical take-off and landing (VTOL) drone in the city of Kobe, Japan, was a successful example of autonomous flight over dense populations. Source: Swift Engineering

“A trailblazer in the next industrial revolution of autonomy and robotics” is how Rick Heise, president and chief strategy officer of Swift Engineering, characterized his company’s positioning following its first fully autonomous flight demonstration in the city of Kobe, Japan.

The San Clemente, California-based aerospace firm collaborated with multiple Japanese agencies leading up to the late July 2018 event, which culminated in the flight of the Swift020, a vertical take-off and landing (VTOL) drone, over a densely inhabited district. The phrase is used in Japan to describe an area of 4,000 people per square kilometer — a little less than the density of American cities such as Miami or Philadelphia.

Japan’s prime minister Shinzo Abe is expected to release drone legislation, including beyond the line of sight provisions, before the end of this year. “This flight provides a solid foundation for a successful progression towards (that) goal,” said Andrew Streett, Swift’s chief scientist and VP of technology.

According to the company, the Swift020 is capable of taking off and landing anywhere. It can also transition to efficient, fixed-wing, forward flight without additional launch and recovery equipment, allowing it to reduce operational time and cost. The drone is part of a family of unmanned aircraft systems (UAS) designed to service linear infrastructure, oil and gas, maritime, emergency services, delivery, agriculture, scientific research, surveillance and security markets.