New Levels of Linearity in Passive Mixers with GaN Technology 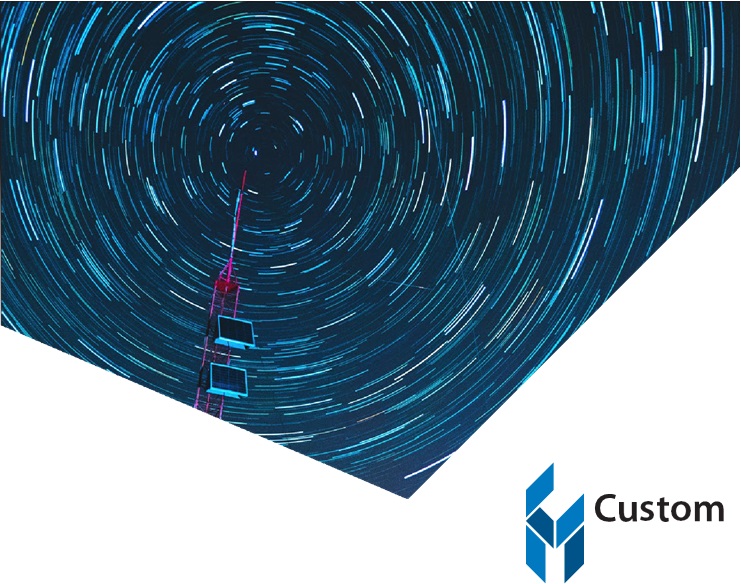 When microwave engineers hear the words “gallium nitride” (GaN), one thought usually comes to their minds: power amplifiers. Due to its physical properties of high breakdown voltage and high thermal conductivity, GaN is ideally suited over its gallium arsenide (GaAs) counterpart for the development of highly efficient, highly effective power amplifiers. Until now, the benefits of GaN technology beyond amplification have not been pursued.

Over the past year, Custom MMIC has been working with a few domestic foundries to investigate the use of GaN for passive mixers. As a result of this work, we have discovered the high-linearity properties of GaN amplifiers do indeed translate to mixers. This realization has let us develop a new family of ultra-linear mixers operating from 1 to 20 GHz. With these mixers, microwave engineers can now approach levels of linearity that once seemed impossible.

The passive, high-frequency mixer market of today is dominated by circuits constructed from various GaAs processes including MESFET, pHEMT and HBT. A key linearity-performance criterion used to judge differ-

In this table, we note that many of the mixers have a linear efficiency of 3 to 8 dB, with no clear dependence on frequency or process. Such linearity performance has been relatively unchanged over the past 20 years, when GaAs-based MMIC mixers were first introduced into the marketplace. Since then, system linearity requirements have only increased. Today, microwave engineers are routinely asking for mixers with IP3 levels above 30 dBm, if not 40 dBm. Based on the information in Table 1, GaAs-based mixers would require extraordinary amounts of LO power — greater than 30 dBm — to achieve these high-linearity levels. Such a cost is usually prohibitive in most systems, and is one reason why highly linear GaAs mixers have not been introduced to the market.

GaN to the Rescue

As developers of passive GaAs mixers, we at Custom MMIC have studied this problem in detail and asked what GaN can do to help solve this problem. One compelling feature of GaN processes is that they can generally support two types of mixing elements: a

two-terminal Schottky diode, and a three-terminal FET. Each of these mixing devices offers its own unique benefits for increased linearity through physical properties and topology choice. Consider the 2-terminal GaN Schottky diode. In Figure 1, we present a typical DC I-V trace for a GaN diode as compared to a typical GaAs pHEMT diode. 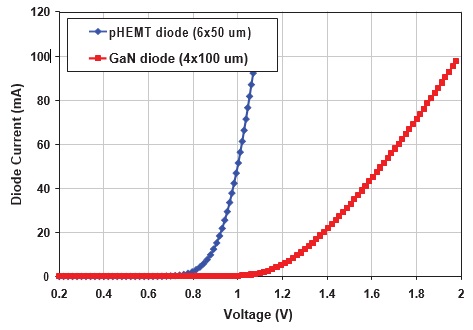 In this figure, we note the pHEMT diode has a turn-on voltage of approximately 0.8 V, whereas the GaN diode has a turn-on voltage closer to 1.1 V. A higher turn-on voltage translates directly into a higher IP3 level, but at a cost of more LO drive. However, as we will see, the GaN diodes deliver a much higher LO efficiency than their GaAs pHEMT counterparts. Although not shown, a similar trend can be seen in the three terminal GaN FET devices, which have a more negative pinch-off voltage and higher break- down voltage than their GaAs counterparts. Such performance allows for higher levels of linearity in passive mixers, again at the cost of higher LO drive.

Custom MMIC has been investigating GaN-based mixers for the past few years on a number of different processes and foundries. Currently, we have developed a family of highly linear mixers with input IP3 levels well above 30 dBm and linear efficiencies of greater than 10 dB. A summary of these designs is shown below in Table 2.

In the sections below, we take a closer look at three of the most recent mixers, which are highlighted in the table below.

The first design is a three-terminal FET mixer as shown in Figure 2. The mixer has an operational bandwidth of 2.6 to 3.8 GHz and an IF response from DC to 1.1 GHz. 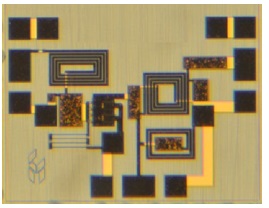 In this figure, we note the LO is applied to the gate through a filter network, whereas the RF/IF is applied to the drain via a diplexer constructed from a spiral transformer. The transformer does not introduce any balance into the circuit, but does allow for an enhanced isolation of the signals. Additional filtering elements in the signal path provide further port-to-port isolations. 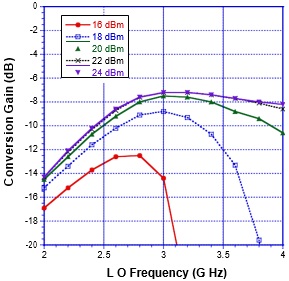 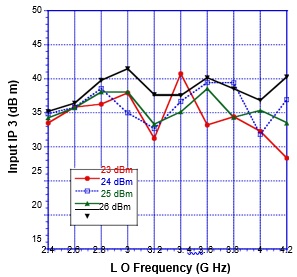 Figure 4. Input IP3 for S-band GaN mixer. IF=100 MHz USB. Source: Custom MMICIn Figure 4, we present the input IP3 of the S-band mixer at a number of LO drive levels. We note that at a drive level of +26 dBm, the input IP3 averages around +40 dBm, which demonstrates a linear efficiency of nearly 14 dB. 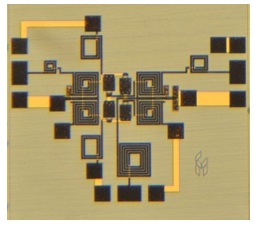 Figure 5. Die photograph of the X-band GaN diode mixer. Source: Custom MMICThe second mixer is a double-balanced, diode-based mixer, as shown below in Figure 5. The operational bandwidth of this mixer is 7 to 14 GHz with an IF response range of DC to 1.5 GHz.

In this figure, we note the LO and RF signals are fed to the diode ring through spiral balun transformers, while the IF signal is extracted from the centertap of the RF balun. Additional matching and filter elements are also added to each of the ports to optimize the performance. 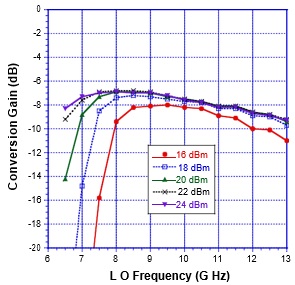 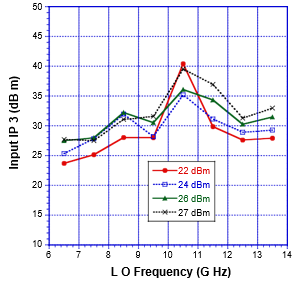 Input IP3 for X-band GaN diode mixer. IF=100 MHz LSB. Source: Custom MMICIn Figure 7, we present the input IP3 of the X-band mixer at a number of LO drive levels. We note that at drive levels above +22 dBm, the input IP3 is +30 to +38 dBm, which demonstrates a linear efficiency of 8 to 12 dBm.

Our third mixer is a single-ended, cold FET mixer, as shown below in Figure 8. The operational bandwidth of this mixer is 13 to 19 GHz with an associated IF response range of DC to 2 GHz. 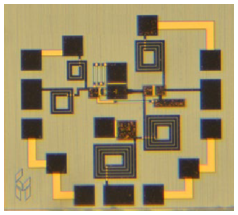 In this figure, we note the LO is applied to the gate of the GaN FET through a filter network, whereas the RF and IF signals are applied to, and extracted from, the drain through high pass (RF) and low pass (IF) net- works. These filter networks provide the isolation in the mixer, as the topology has no inherent balance. The source of the FET is grounded. 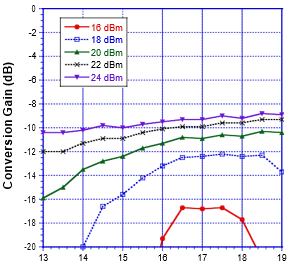 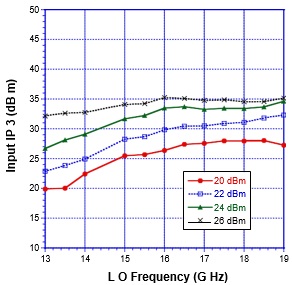 Figure 10. Input IP3 for the Ku-band GaN FET mixer. IF=100 MHz USB. Source: Custom MMICIn Figure 10, we present the input IP3 of the Ku-band mixer at a number of LO drive levels. We note the input IP3 increases as the LO drive level increases, up to a measured value of +35 dBm. This does not appear to be the ultimate limit. Unfortunately, we were constrained in LO drive during this measurement and were unable to generate higher power. Regardless, the Ku-band FET mixer demonstrates a linear efficiency of 8 to 10 dB.

Where Do We Go From Here?

Based on the results for these three examples, it is clear that GaN mixers can deliver linear efficiencies that are much higher than their GaAs counterparts.

The use of two-terminal or three-terminal mixing devices offers a wide range of mixer topology possibilities, thus allowing GaN mixers to be optimized for many different microwave systems. At Custom MMIC, we have already begun developing GaN mixers to cover more of the frequency spectrum, while still retaining very high linear efficiencies. We expect these mixers will soon find their way into radar communications and instrumentation systems near and far.