Programming robots can get expensive. Students learning to program autonomous robots often spend more time repairing robots after they are damaged by coding mistakes, than they do learning to program. An incorrectly programmed robot could drive off a tabletop or crash into a wall. This can result in hours of hands-on repair work. 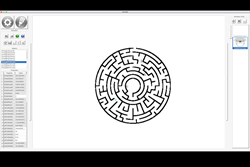 The free RoboScience Simulator looks like a rudimentary video game on the screen, but gets the job done when it comes to teaching students to code. (Source: South Dakota School of Mines and Technology)

Professors and students at the South Dakota School of Mines and Technology have created the RoboScience Simulator, a senior design project for a group of computer science students during the 2017-2018 academic year. This simulator allows students to learn how to program on an inexpensive platform.

The K-12 level of robotics programming already has a decent curriculum that is available to schools. But beyond K-12, there are fewer options and those can be expensive, reaching around $3,000 per student. The goal of the new programming simulator is to provide a cheap option for further programming education.

The RoboScience Simulator will be an open source simulation program that universities can use without cost, including an online portal, free textbooks and basic robotics software.

The RoboScience Simulator program looks a bit like a rudimentary video game, with a simple outline of a “robot” moving through various obstacles. Programmers can work out the kinks of a program and watch a simulation of an autonomous robot on a screen, before using it on an actual robot.

Students start with simple programming, like having a robot do a virtual figure eight. If the programming is not right, and the robot will launch into the virtual wall. This stops the real robot from being harmed by testing a new program in real life — a student can simply start over on the computer coding. Students can use the simulators at home, increasing the time they can experiment with programming and furthering their programming education.

When developing the new simulator, the team logged about 1,000 hours as a team and about 200 per student. By summer 2019, the RobotScience Simulator could be ready to test in another university setting and by 2020 it may be available to all schools.

To learn more about the RobotScience Simulator, visit the site here.