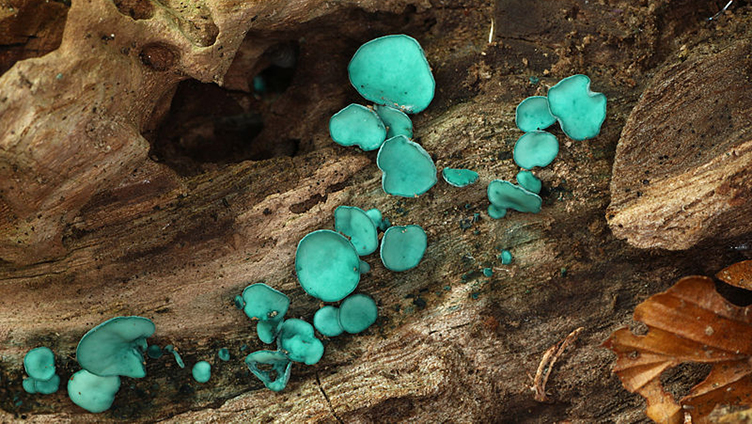 Fungi from the Chlorociboria genus produces a blue-green wood stain that has been used for artwork, and may find new use as a semiconductor material. Source: H. Krisp/CC BY 3.0, from Wikimedia Commons.

A highly-durable organic pigment, produced by fungi and used for hundreds of years in artwork, might find a new use as a semiconductor material.

The pigment is called xylindein, and it shows up as a blue-green stain on wood infected by fungi from the genus Chlorociboria. It possesses a stability that withstands prolonged exposure to heat, ultraviolet light and electrical stress. Five-hundred-year-old decorative products, in fact, still exhibit its distinctive hue.

"If we can learn the secret for why those fungi-produced pigments are so stable, we could solve a problem that exists with organic electronics," said Oksana Ostroverkhova, a physicist at Oregon State University (OSU). "Many organic electronic materials are too expensive to produce, so we're looking to do something inexpensively in an ecologically friendly way that's good for the economy," she added.

Research findings suggest that xylindein could become a sustainable, low-cost, easily fabricated alternative to silicon in electronic or optoelectronic applications — particularly those in which the high-performance capabilities of silicon aren't needed.

While current xylindein fabrication techniques have produced non-uniform films with a porous, irregular, "rocky" structure, Ostroverkhova and her collaborators were able to achieve better results by blending the pigment with a transparent, non-conductive polymer known as PMMA. PMMA is poly(methyl methacrylate), a substance also sometimes referred to as acrylic glass. The blending technique did not have a detrimental effect on xylindein’s electrical properties, and in fact produced films with better photosensitivity.

"Xylindein will never beat silicon, but for many applications, it doesn't need to beat silicon," Ostroverkhova explained. "It could work well for depositing onto large, flexible substrates, like for making wearable electronics."

The research, recently published in MRS Advances, represents the first use of fungi-produced material in a thin-film electrical device.

This may be just the tip of the iceberg. Ostroverkhova noted that there are many more materials that could be explored — enough to potentially be what she referred to as “the beginning of a whole new class of organic electronic materials.”