Van der Waals heterostructures, which are assemblies of atomically thin 2D crystalline materials that display attractive conduction properties for use in advanced electronic devices, are of interest in nanotechnology. Their development has been restricted by the complicated and time-consuming manual operations required to produce them. The 2D crystals typically obtained by exfoliation of a bulk material must be manually identified, 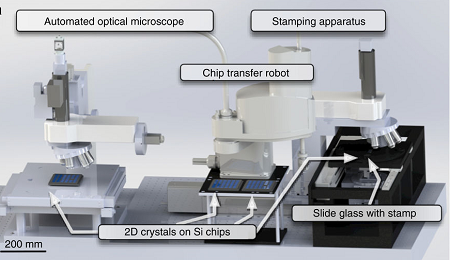 Researchers from Japan’s National Institute for Materials Science and the University of Tokyo has solved this issue by developing an automated robot to greatly speed up the collection of 2D crystals and their assembly to form van der Waals heterostructures. An automated high-speed optical microscope detects crystals, the positions and parameters of which are then recorded in a computer database. Customized software is used to design heterostructures using the information in the database. The heterostructure is then assembled layer-by-layer by robotic equipment directed by the designed computer algorithm.

According to the researchers, the robot can detect 400 graphene flakes an hour, which is much faster than the rate achieved by manual operations.

The research is reported in Nature Communications.