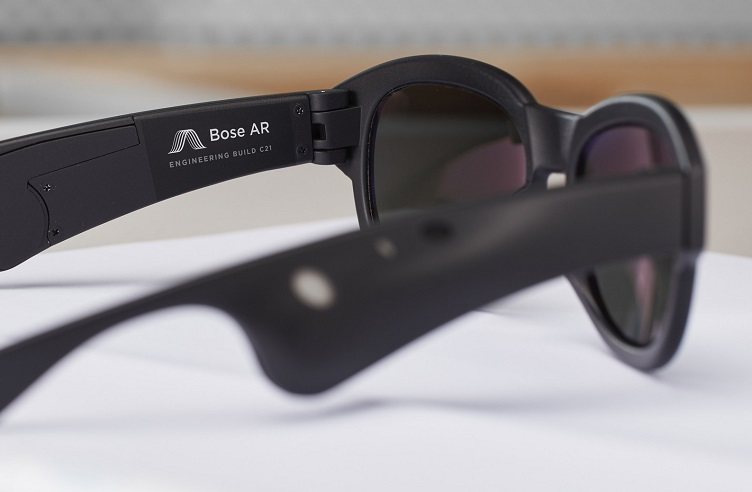 The prototype glasses created by Bose that function as standard eyewear but sound like headphones. Source: Bose

Bose has introduced what it claims is the first audio augmented reality (AR) platform in prototype audio platform that doesn’t require an integrated lens or phone camera.

Unveiled at SXSW show, the prototype platform adds an audible layer of information and experiences rather than superimpose visual objects on the real world. The AR can be built into headphones, eyewear, helmets and more without compromising existing functionality. The technology also allows for head gestures, voice or tapping on a wearable to control content rather than swiping or typing for commands.

"It places audio in your surroundings, not digital images, so you can focus on the amazing world around you— rather than a tiny display,” says John Gordon, VP of the consumer electronics division of Bose. “It knows which way you're facing, and can instantly connect that place and time with endless possibilities for travel, learning, music and more. And it can be added to products and apps we already use and love, removing some of the big obstacles that have kept AR on the sidelines."

Bose has created a prototype pair of glasses, implementing the technology that were manufactured and engineered by the company. The glasses are Bluetooth compatible for calls and support voice commands through Siri and Google Assistant. Bose says the glasses are built and function like standard eyewear but sound like Bose headphones.

In addition to taking calls, the prototype glasses allow for listening to music or using VPAs, and the sensors track head motion and GPS from an iOS or Android device tracks location. The motion and location data is sent to the Bose AR app that aggregates the information with real-time content back to the user’s ears instantly. Because this is done hands free, heads-up and wirelessly, there is no need to grab or touch a smartphone, Bose says.