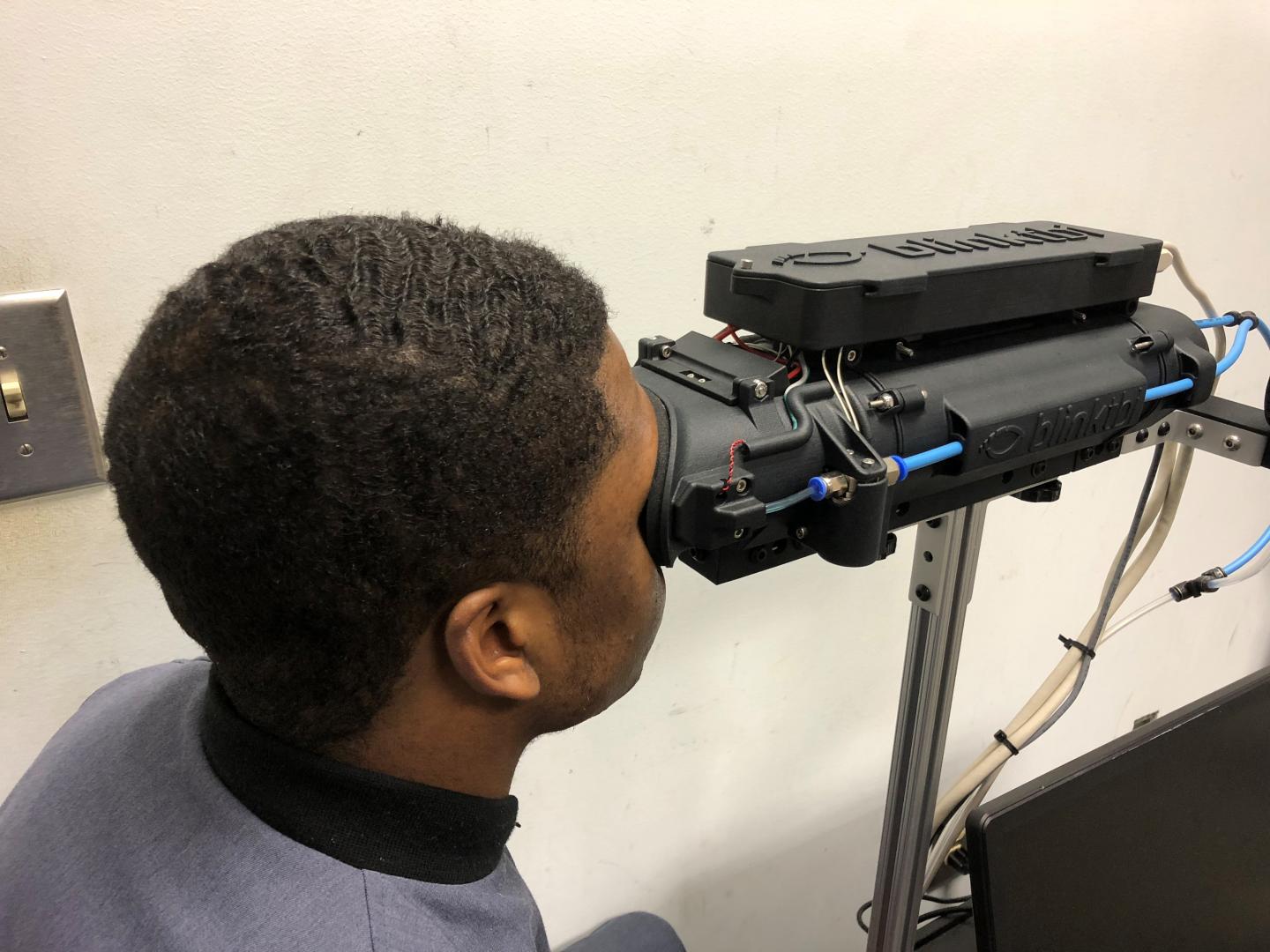 The Blink Reflexometer being used to measure the blink reflex of a cadet at the Citadel. Source: The Citadel

Research shows that almost a quarter of traumatic brain injuries in children happen during high-contact activities, like football. But the methods that doctors and coaches use to detect and evaluate concussions are not as accurate as they should be. Doctors base their concussion-related decisions on symptom assessments that test things like balance and self-reports. These methods can frequently be incomplete or misleading, which leads to poor diagnoses.

A team of researchers from the Medical University of South Carolina (MUSC) saw this problem and developed a device to help doctors accurately assess concussions. Their new device is called the Blink Reflexometer™, a high-speed videography device.

"I was excited to see this type of technology coming out to help us better pinpoint and potentially aid in the diagnosis of concussion," said Dena Garner, Ph.D. professor of health, exercise and sports science at The Citadel. "Concussion is a mild traumatic brain injury and we know it's under-reported because, so often, it goes unnoticed or undiagnosed. The chance to test a piece of equipment that can be used field-side to assess concussions was especially compelling."

The Blink Reflexometer™ triggers, records and analyzes detailed information about a concussion patient's blink reflex. The patient wears a mask that sends three to five air puffs at random intervals within 20 seconds to the outer corner of either eye. After a 20-second break, there are two more sets of puffs that finish off the test. The device records at 280 frames per second and isolates and analyzes the frames.

During testing of the device, Garner collected blink reflex data from 24 Division I male football players ages 18-22 over the 2015 and 2016 football seasons. The preseason data was used as the baseline for 10 blink reflex parameters. The players were divided into two groups based on if they were suspected to have some kind of brain injury. If a concussion was suspected, the players were retested using the Blink Reflexometer within 48 hours after the event. The researchers collected these players’ blink reflex data and used them as the standards for concussion evaluations.

The first step of the research was to find if there are even any changes in blinking after a potential concussion and if the reflexometer could even register these differences. The control data proved that there are differences in blink reflex between blinks during baseline and post-game. After a game, the control athletes were blinking way more than they were when they were before the game. The control athletes had a decrease in latency, lid velocity and shorter blink duration after the game.

When compared to baseline players, the players who experienced head impacts had a decrease in blink latency, increase differential latency and larger lid excursions post-impact.

"A human's blink reflex has a long pathway — originating in the facial area and continuing to the brain stem. If any place along that pathway is damaged, changes in the blink reflex can indicate that there is a potential problem," explained Garner. "We now know that concussions and normal play both affect the blink parameters, but in differing directions. Our observations identified something distinctly different occurring in the concussion brains that can serve as a valuable new indicator for diagnosing the condition."

This research has helped the developers confirm that the Blink Reflexometer could be a key diagnostic tool for athletic trainers and doctors to figure out if an athlete has a concussion on the sidelines of the game. This could keep coaches from putting players in a game who have developed a concussion, which could stop further damage to the player’s brain.

While this research is an advantage for the Blink Reflexometer, the researchers want to make it clear that the findings only support the use of blink reflex assessments to measure the severity of head impacts and not an endorsement for the device. The researcher sees these findings being used in more than just sports head injuries and extend to a range of neurological disorders.

"We're now collecting normative blink reflex data in different age groups and other sports, with a future goal of collecting data from people with neurological diseases like Parkinson's and multiple sclerosis," said Garner. "We hope that one day we'll be able to use blink reflex data to help determine severity or progression in other diseases. There's really wide potential for its application."

The paper on this research was published in Cogent Engineering.