Watch: New Technology Allows Parents, Coaches and Medics to Detect a Concussion with a Smartphone

Researchers from the University of Washington are developing the first smartphone app that is capable of detecting concussion and other traumatic brain injuries in the field, like on the sidelines of sports game, on a battlefield or in the home of an elderly person. 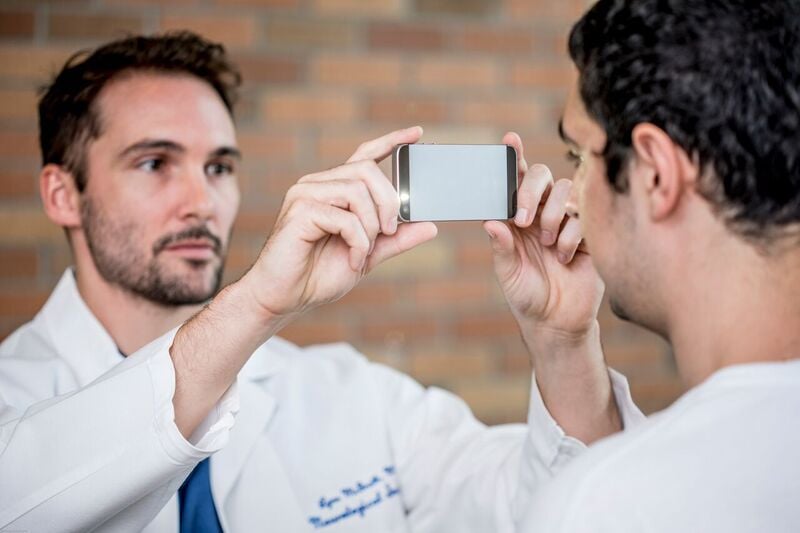 The pupillary light reflex has been used to assess if a person has a traumatic brain injury. Recent research finds that it can also be useful in detecting milder concussions. This opens a new avenue for screening.

The team of computer scientists, electrical engineers and medical researchers demonstrated that PupilScreen can be used to detect instances of significant traumatic brain injury. A broader clinical study to be conducted this fall will provide coaches, emergency medical technicians, doctors and others with PupilScreen to gather more data on which pupillary response characteristics are the most helpful in determining ambiguous cases of concussion. The team hopes they can release a commercially available version of PupilScreen within two years.

"Having an objective measure that a coach or parent or anyone on the sidelines of a game could use to screen for concussion would truly be a game-changer," said Shwetak Patel, the Washington Research Foundation Endowed Professor of Computer Science & Engineering and of Electrical Engineering at the UW. "Right now the best screening protocols we have are still subjective, and a player who really wants to get back on the field can find ways to game the system."

PupilScreen can assess a patient’s pupillary light reflex almost as well as pupilometer. A pupilometer is an expensive and rarely-used machine in hospitals. PupilScreen uses the smartphone’s flash to stimulate the patient’s eyes and the video camera to record a three-second video.

The video is processed using a deep learning algorithm that determines which pixels belong to the pupil in each video frame and measures the changes in pupil size across the frames. A pilot study combined 48 results from patients with traumatic brain injury and from healthy people. Clinicians were able to diagnose the brain injuries with almost perfect accuracy using the app’s output.

PupilScreen aims to generate objective and clinically relevant data that anyone could use to determine if a player needs to be further assessed for concussion or another brain injury.

The U.S. Centers for Disease Control and Prevention estimates that about half of the 3.8 million concussions per year in the U.S. from sports injuries go undiagnosed. This puts millions of young players and adults at risk for future head injury and permanent cognitive deficits.

In the past, there has been no guaranteed way to diagnose a concussion, even in the emergency room. Typically, doctors run tests to rule out worst case scenarios like a brain bleed or skull fracture. After serious head injuries are excluded, usually a diagnosis of a concussion is made.

Medical professionals have used the pupillary light reflex — usually in the form of a penlight test where they shine a light into the patient’s eyes — to assess severe brain injuries. A growing body of medical research has recently found that subtle changes in pupil response can be useful in detecting mild concussions.

"PupilScreen aims to fill that gap by giving us the first capability to measure an objective biomarker of concussion in the field," said author Dr. Lynn McGrath, resident physician in UW Medicine’s Department of Neurological Surgery, "After further testing, we think this device will empower everyone from Little League coaches to NFL doctors to emergency department physicians to rapidly detect and triage head injury."

The UW team initially tested PupilScreen with a 3D printed box to control the eye’s exposure to light, but researchers are now training the machine learning neural network to produce similar results with just a smartphone camera.

"The vision we're shooting for is having someone simply hold the phone up and use the flash. We want every parent, coach, caregiver or EMT who is concerned about a brain injury to be able to use it on the spot without needing extra hardware," said lead author Alex Mariakakis, a doctoral student in the Paul G. Allen School of Computer Science & Engineering.

One of the challenges the team faces with developing PupilScreen involves training the machine learning tools to distinguish between the eye’s pupil and iris. This involves annotating around 4,000 images of eyes by hand. A computer has an advantage of being able to quantify subtle changes in the pupillary light reflex that the human eye can’t perceive.

The PupilScreen researchers are currently working to identify partners that are interested in conducting additional field studies of the app. They expect to start this in October.

A paper on this research will be presented on September 13 at Unicomp 2017.