A type of battery first invented nearly 50 years ago could launch to the front of energy storage technologies thanks to researchers at MIT and other institutions. The battery, which is based on electrodes made of sodium and nickel chloride, and using a new type of material called metal mesh membrane, could be used for grid-scale installations to make intermittent power sources like wind and solar capable of delivering reliable baseload electricity. 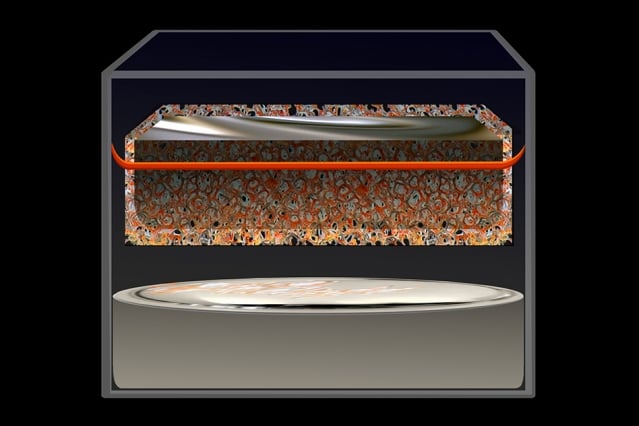 A type of battery first invented nearly five decades ago could catapult to the forefront of energy storage technologies, thanks to a new finding by researchers at MIT and other institutions. (Source: MIT News)

The basic battery chemistry that the team used is based on liquid sodium electrode materials. This chemistry was first described in 1968, but the concept never caught on as a practical approach because it had one significant drawback: it required the use of a thin membrane to separate the molten components, and the only known material with the needed properties for the membrane was ceramic, which was brittle and fragile.

The paper-thin membranes made the batteries too easily damaged in real-world operating conditions. So except for a few specialized industrial applications, the system has never been widely implemented.

Sadoway and his team took a different approach and they realized that the functions of that membrane could instead be performed by a specially coated metal mesh, which is a much stronger and more flexible material that could stand up to the rigors of use in industrial-scale storage systems.

For the first time in five decades, this type of battery could finally become practical and Sadoway called this a breakthrough.

There are a few significant advantages in this type of battery. It is cheap, the raw materials required are abundant, it has very safe operational characteristics and has an ability to go through many charge-discharge cycles without degradation.

Some companies continued to make liquid-sodium for specialized uses because the cost was still high for these new batteries due to the fragility of the ceramic membranes. GE spent nearly 10 years working on this technology before abandoning it completely.

As the team explored various options for the different components in a molten-metal-based battery, they were surprised by the results of one test that used lead compounds.

"We opened the cell and found droplets inside the test chamber, which would have to have been droplets of molten lead," he says. But instead of acting as a membrane, as expected, the compound material was acting as an electrode, actively taking part in the battery's electrochemical reaction,” said Sadoway. “That really opened our eyes to a completely different technology."

The membrane performed its role, selectively allowing certain molecules to pass through while blocking others, in an entirely different way. It used its electrical properties rather than mechanical sorting based on the sizes of pores in the material.

In the end, the team found that an ordinary steel mesh coated with a solution of titanium nitride could perform all the functions of the previously used ceramic membranes, but without the brittleness and fragility. This resulted in a whole family of inexpensive and durable materials that are practical for large-scale rechargeable batteries.

The use of the new type of membrane can be applied to a wide range of molten-electrode battery chemistries and opens up new opportunities for battery design.

"The fact that you can build a sodium-sulfur type of battery, or a sodium/nickel-chloride type of battery, without resorting to the use of fragile, brittle ceramic -- that changes everything," Sadoway says.

The work could lead to cheap batteries that are large enough to make intermittent, renewable power sources that are practical for grid-scale storage and the same underlying technology may have other potential applications.

Sadoway says that these batteries may not be suitable for larger uses, like cars or phones. Their strong point is in large, fixed installations where the cost is important but the size and weight are not, like utility-scale load leveling. In those types of applications, inexpensive battery technology could potentially enable a greater percentage of intermittent renewable energy sources to take place of baseload power sources that are currently dominated by fossil fuels.