Researchers Develop Method to Clean Nanotubes as Much as Possible

Carbon nanotubes bound for electronics need to be as clean as possible to maximize their utility in next-generation nanoscale devices. Scientists at Rice and Swansea Universities have found a way to remove contaminants from the nanotubes. 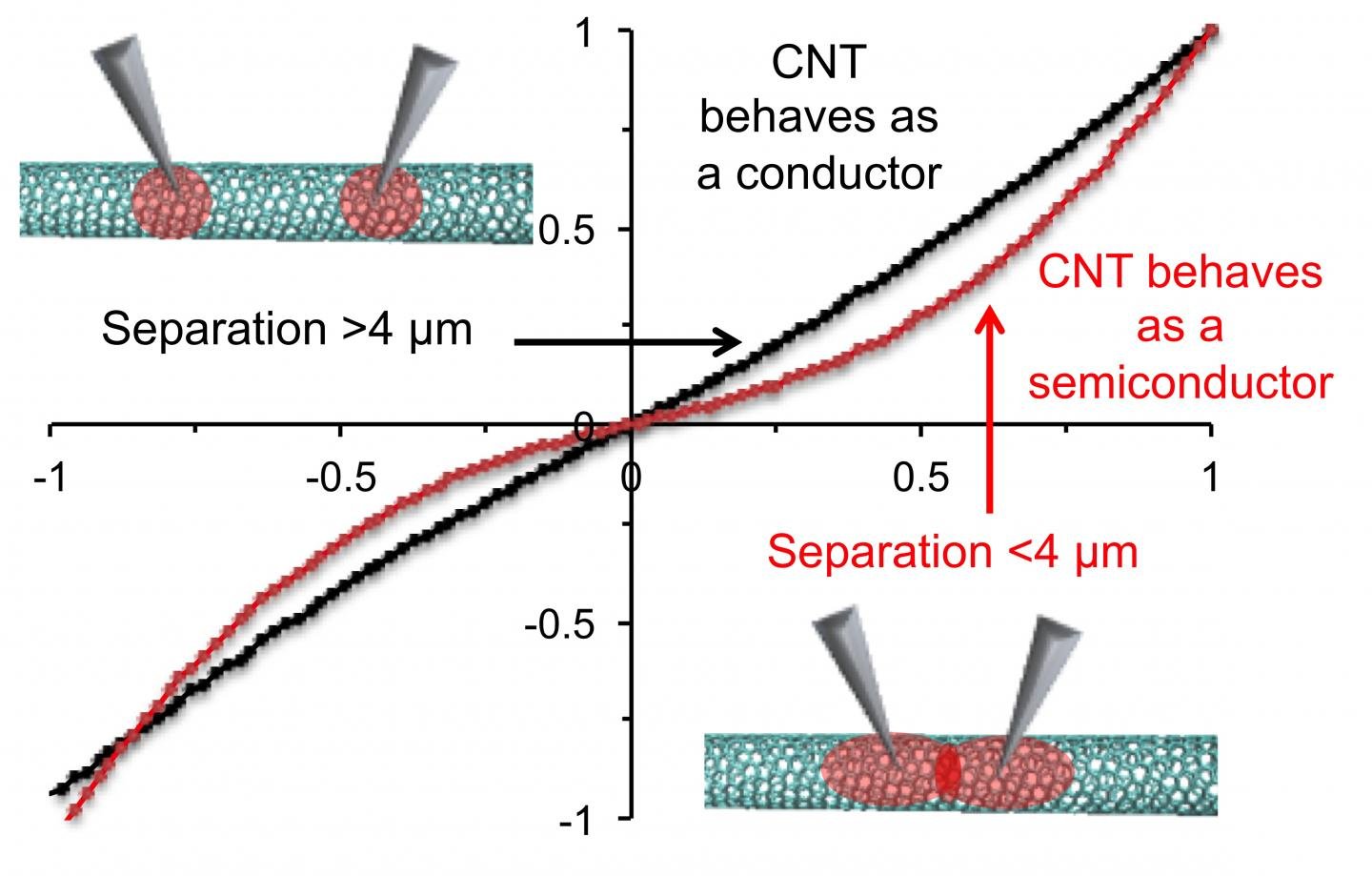 Scientists at Rice and Swansea universities have demonstrated that heating carbon nanotubes at high temperatures eliminates contaminants that make nanotubes difficult to test for conductivity. They found when measurements are taken within 4 microns of each other, regions of depleted conductivity caused by contaminants overlap, which scrambles the results. The plot shows the deviation when probes test conductivity from minus 1 to 1 volt at distances greater or less than 4 microns. Source: Barron Research Group/Rice University

Rice chemist Andrew Barron, also a professor at Swansea University in the United Kingdom, and his team have figured out how to get nanotubes clean, and discovered why the electrical properties of nanotubes have been so difficult to measure.

Like a normal wire, semiconducting nanotubes are progressively more resistant to current along their length. But over time, conductivity measurements of nanotubes have not been consistent. The Rice-Swansea team wanted to know the reason for this.

"We are interested in the creation of nanotube-based conductors, and while people have been able to make wires, their conduction has not met expectations," Barron said. "We wanted to determine the basic science behind the variability observed by other researchers."

The researchers first made multiwalled carbon nanotubes between 40 and 200 nanometers in diameter and up to 30 microns long. Then they either heated the nanotubes in a vacuum or bombarded them with argon ions to clean the surfaces.

They then tested individual nanotubes the same way they would test any electrical conductor. They touch them with two probes to see how much current passes through the material from one tip to the other. In this case, tungsten probes were attached to a scanning tunneling microscope.

In clean nanotubes, resistance got progressively stronger as the distance increased as it should — the results were skewed when the probes encountered surface contaminants. This increased the electrical field strength at the tip. When measurements were taken within 4 microns of each other, regions of depleted conductivity caused by contaminants overlapped, which further scrambled the results.

"We think this is why there's such inconsistency in the literature," Barron said. "If nanotubes are to be the next-generation lightweight conductor, then consistent results, batch-to-batch, and sample-to-sample are needed for devices such as motors and generators as well as power systems."

Heating the nanotubes in a vacuum above 200 degrees Celsius reduced surface contamination, but not enough to eliminate inconsistent results. Argon ion bombardment also cleaned the tubes but led to an increase in defects that degrade conductivity.

Barron said that engineers who use nanotube fibers in films in devices currently modify the material through doping or other means to get the conductive properties they require. But if the source nanotubes are sufficiently decontaminated, they should be able to get the desired conductivity by simply putting contacts in the right spot.

"A key result of our work is that if contacts on a nanotube are less than 1 micron apart, the electronic properties of the nanotube change from conductor to semiconductor, due to the presence of overlapping depletion zones, which shrink but are still present even in clean nanotubes," Barron said.

"This has a potential limiting factor on the size of nanotube-based electronic devices," he said. "Carbon-nanotube devices would be limited in how small they could become, so Moore's Law would only apply to a point."

The paper on this research was published in Nano Letters.