Wrinkles in Pillared Graphene Gives a Jolt to Heat

Rice University engineers have discovered that pillared graphene could transfer heat better because the theoretical material had a few asymmetric junctions that caused wrinkles.

Rice materials scientist Rouzbeh Shahsavari and alumnus Navid Sakhavand built atom-level computer models of pillared graphene, sheets of graphene connected by covalently bonded carbon nanotubes. He did this to discover their strength and electrical properties as well as their thermal conductivity. 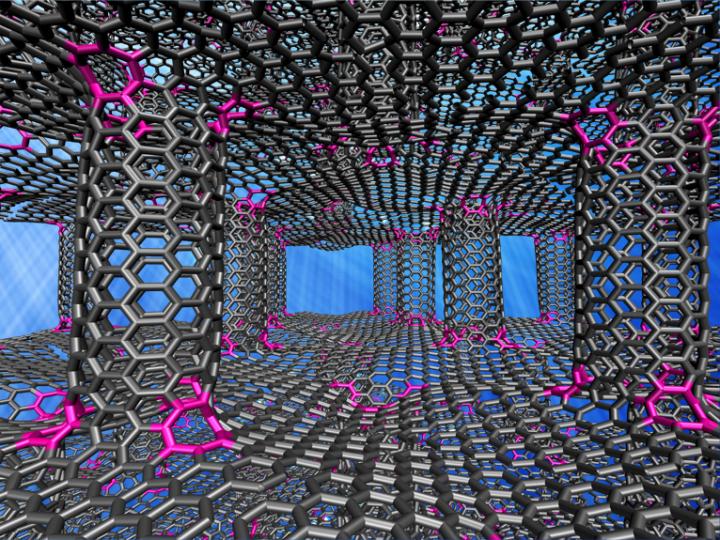 Heat transport through pillared graphene could be made faster by manipulating the junctions between sheets of graphene and the nanotubes that connect them, according to Rice University researchers. Source: Lei Tao/Rice University

The engineering team found that manipulating the joints between the nanotubes and graphene has a significant impact on the material’s ability to direct heat. That could be very important as electronic devices shrink and require more sophisticated heat sinks.

The researchers who are making the pillared graphene have primarily viewed two characteristics of the theoretical material: the length of the pillars and their distance from each other. The new study suggests that a third parameter — the nature of the junction between the graphene and nanotubes — should be considered.

A seamless connection between flat graphene, the atom-thick form of carbon and round nanotubes, requires adjustments to their characteristic six-member carbon rings. The simplest way is to give half the rings at the junction an extra atom. Six seven-member rings alternating with six six-member rings allow the sheet to make a 90-degree turn to become the tube.

But that is not the optimal configuration for heat transport. It found that replacing six heptagons with three octagons would facilitate the turn while slightly stressing the graphene. That would wrinkle the graphene sheets’ top and bottom while not significantly changing transport at the junctions.

The researchers intuitively expected the wrinkles to lower thermal transport and were surprised to find that thermal transport across the “in-plane” became faster with wrinkles. They determined that having fewer rings in the junctions between nanotubes and graphene meant less scattering of heat-carrying photons, which kept them onboard for the bumpy ride.

Measured along the longest plane, models with the octagons were nearly 20 percent better at transporting photons than those without.

“Our results show that subtle features such as this junction configuration have a significant impact on thermal transport," said Shahsavari, an assistant professor of civil and environmental engineering and of materials science and nanoengineering. "Given the current needs in thermal management and device miniaturization in many nano- and microelectronics, this study provides a new degree of freedom to play and improve thermal transport."

The researchers thought the photon transport through the nanotubes, which they already knew was slower than graphene, might be slower still under the influence of the octagons, but the altered interface didn’t appear to have a significant effect.

"The reason lies in the geometry," Shahsavari said. "The lower the number of non-hexagonal rings in the junction (for example three octagons versus six heptagons), the lower the number of undesirable rings and thus lower photon scattering and improved thermal transport. Because the junctions can adopt many different geometries depending on the radius and chirality of the nanotube, there are many more potential configurations to be modeled.”

A paper on this research was published in ACS Applied Materials & Interfaces.