Nicolette Emmino
The field of quantum computing studies theoretical computation systems, called quantum computers, that make use of quantum-mechanical phenomena like superposition and entanglement in order to perform operations on data.

Quantum computers differ from binary digital electronic computers in terms of transistors. A common digital computer requires that the data be encoded into binary digits (called bits), each of which is always in one of two definite states (0 or 1), while quantum computers use quantum bits (referred to as qubits), which can be in super-positions of states.

A team of researchers from Pennsylvania State University has brought us closer to real-world, functional quantum computing now that it has demonstrated a new way to pack a lot more quantum computing power into a much smaller space and with more control than ever before.

Their advance uses a three-dimensional array of qubits.

The array was developed by David S. Weiss, professor of physics at Penn State University, and three students on his team.

"Our result is one of the many important developments that still are needed on the way to achieving quantum computers that will be useful for doing computations that are impossible to do today, with applications in cryptography for electronic data security and other computing-intensive fields,” said Weiss.

The new technique employs laser light and microwaves to control the switching of selected individual qubits from one quantum state to another—without changing the states of the other atoms in the cubic array. What this means is that atoms could potentially be used as the building blocks of circuits in future quantum computers.

Qubits are necessary for conducting any form of calculations in a quantum computer and the new approach offers an innovative way of arranging and controlling them.

Weiss's team plans on further developing the method, which is expected to be useful to scientists pursuing other approaches to building a quantum computer, like those based on other atoms, ions or atom-like systems in one or two dimensions.

"If this technique is adopted in those other geometries, they would also get this robustness," said Weiss.

How It Was Done 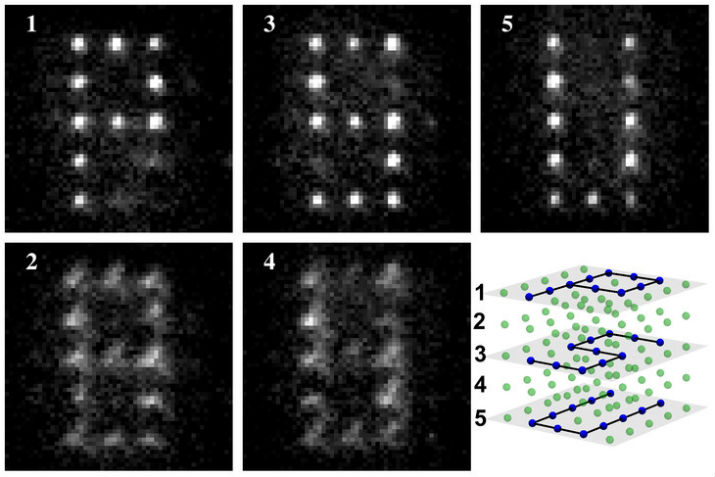 The team constructed a lattice made by beams of light to trap and hold the atoms in a cubic arrangement of five stacked planes in order to corral their quantum atoms into an orderly 3-D pattern for the experiments. Each configuration had room for 25 equally spaced atoms and formed a cube with an orderly pattern of individual locations for 125 atoms.

The scientists filled some of the possible locations with qubits consisting of neutral cesium atoms (without a positive or negative charge). Unlike the bits in a classical computer, which typically are either zeros or ones, each of the qubits in the Weiss team's experiment has the difficult-to-imagine ability to be in more than one state at the same time, an essential feature of quantum mechanics, which was referred to previously as quantum super-position.

The team then used crossed beams of laser light to target individual atoms in the lattice. When the scientists then immersed the whole array in a slew of microwaves, the state of the atom with the shifted energy levels changed, while the states of all the other atoms did not.

"We have set more qubits into different, precise quantum super-positions at the same time than in any previous experimental system," said Weiss. The scientists also designed their system to be very insensitive to the exact details of the alignments or the power of those light beams they use—which Weiss said is a good thing because "you don't want to be dependent upon exactly what the intensity of the light is or exactly what the alignment is."

Weiss’s future research will include finding a way for qubits to "have entangled quantum wave functions where the state of one particle is implicitly correlated with the state of the other particles around it." According to Weiss, this entangled connection between qubits is a critical element needed for quantum computing.