Researchers from the National Institute of Standards and Technology (NIST) have invented a new approach to testing multilayered, 3D computer chips that are now appearing in some of the latest consumer devices. The new method may be the answer the semiconductor industry needs to quickly assess the reliability of this relatively new chip construction model, which stacks layers of flat circuitry on top of one another, like floors in a building, to help make chips ever-faster and packed with features. 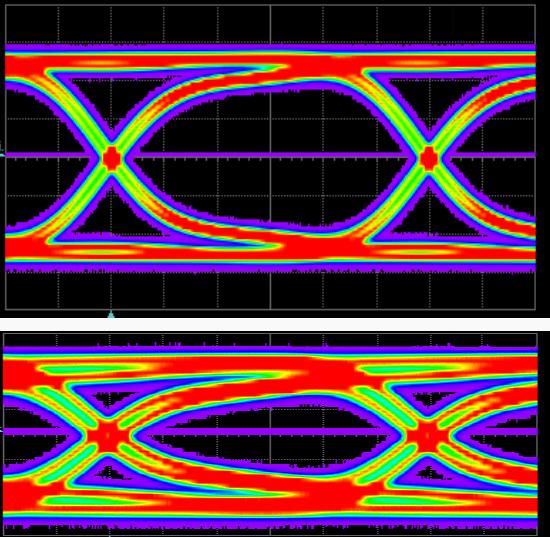 These 'eye' diagrams reveal how much noise is present in a digital signal. As the signal grows noisier, its characteristic shape grows distorted, shrinking the center so it resembles an eye closing. NIST's new 3D chip-testing method passes microwaves through chip material, allowing researchers to quickly detect flaws that would create noise and make the diagram change from the open-eyed clarity of the top image to the squintier distortion on the bottom. Source: Y. Obeng and N. Hanacek/NIST

The new approach overcomes the limitation of conventional chip-testing methods on the 3D chips, which have many thin horizontal “floors” connected to one another by vertical pathways called through-substrate visas, or TSVs. The TSVs are essential to the operation of 3D chips, which have become commercially viable only in the past few years after decades of sustained development effort by the industry.

With NIST’s new testing method, chip designers may have a better way to minimize the effects of “electromigration,” a perennial cause of chip failure rooted in the wear and tear that relentless streams of flowing electrons inflict upon the fragile circuitry that carries them. The NIST approach could give designers a quicker way to explore the performance of chip materials in advance. This provides more, and almost real-time, insight into what materials will best serve in a 3D chip.

"Our work shows it may be possible to spot microscopic failures faster," said NIST's Yaw Obeng, research chemist and the leader of the Metrology for Emerging Integrated Systems project. "Instead of waiting for months, we can see in days or hours when it's going to happen. You can run our tests during the material selection phase to see how processing will affect the end product. If you can't see it, you might make the wrong decision."

If a 3D chip were a high-rise building, TSVs would be elevators. They help 3D chips do three things: speed up, shrink down and cool off. By allowing elements on different floors to communicate with each other, signals no longer need to travel all the way across a comparatively sprawling 2D chip, meaning calculations go faster and electrons heat up far less conducting material as they move.

With these advantages, TSVs also carry one drawback. Their reliability is hard to test with the conventional method, which involves passing the direct current through the conductor and waiting for its resistance to change. It is very time-consuming, requiring weeks or months to show results. The chip industry needs a new metrology approach that is quick and realistic. That would reveal the impact on the high-speed signal that actually runs through the conductors.

The new NIST testing method sends microwaves through the material and measures changes in the amount and the quality of the signal. The testing set up, which simulates real-world conditions, repeatedly heats and cools the material, causing it to develop flaws and, over time, the microwave signal decreases in strength and decays from a clean, square-shaped wave to one that is noticeably distorted.

Using microwaves brings multiple benefits. Chief among them is how rapidly the method provides information about a device’s reliability, in the actual device of interest, long before it actually fails — a possibility unavailable with the resistance-based approach.

"Before failure comes what we call a 'quiescent period' when the beginnings of defects are blowing around through the material, like seeds in the wind," Obeng said. "The microwaves show this process happening. If you just watch the material with resistance, you don't see this; it's either alive or dead."

Microwaves could reveal information about defects as quickly as three days after testing begins, while conventional tests can take months.

Obeng estimates this method could be fully implemented by industry within a few years and could provide valuable insights.

"This approach would give materials designers insight into what materials to use in chips and how to build them," he said. "Making the right decisions can result in an end product that's more stable and reliable. This will give them more information to make those decisions."

The paper on this research was published in the Journal of Applied Physics.