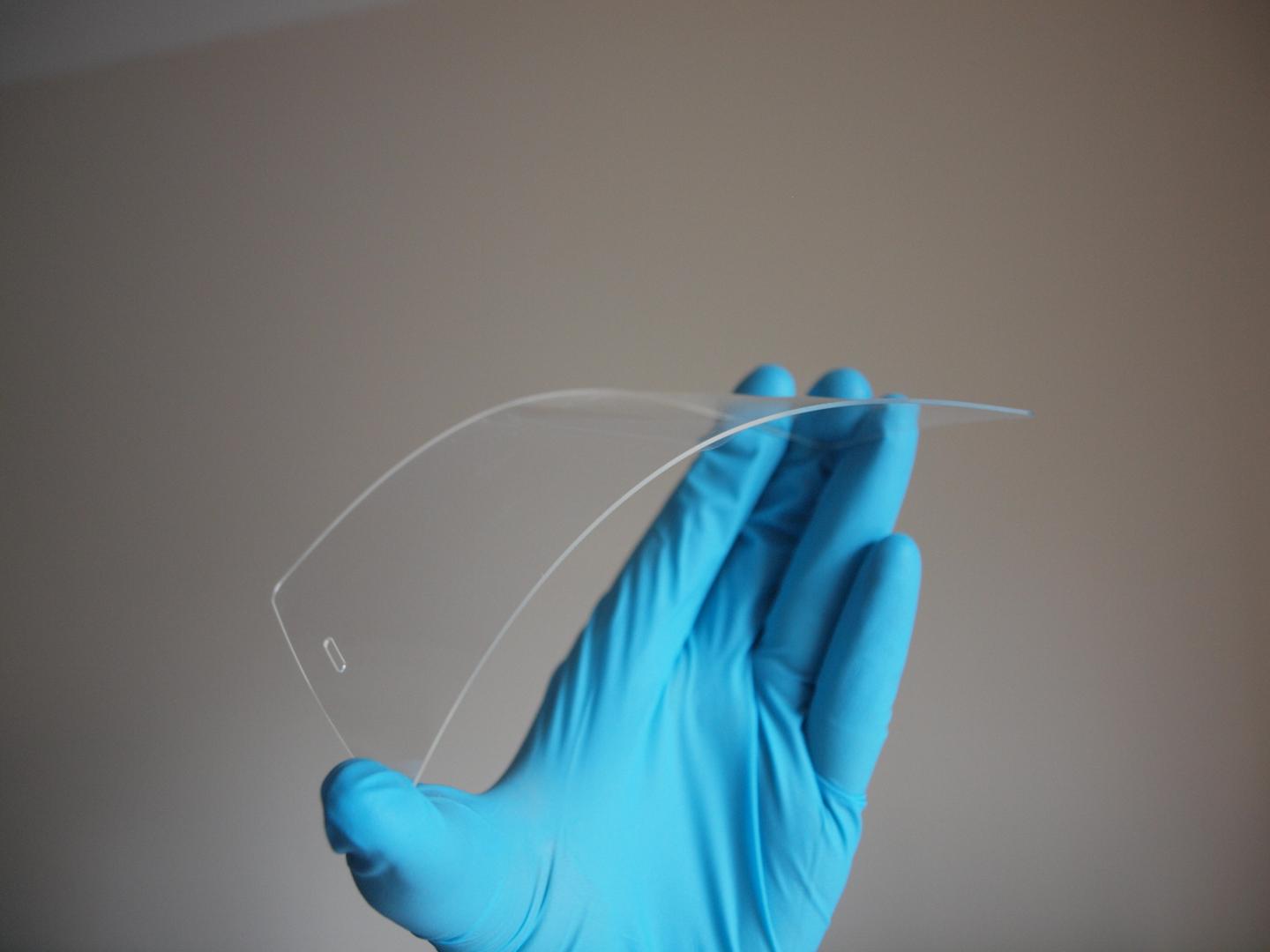 Dr Matthew Large, University of Sussex, flexes a screen made from acrylic plastic coated in silver nanowires and grapheme to illustrate the kind of touch screens that can potentially be produced using the new approach. Source: Dr. Matthew Large

Scientists at the University of Sussex may have found a solution to the problem of brittle smartphone screens.

Professor Alan Dalton and his team have developed a new method to make smartphone touchscreens that are cheaper, less brittle and more environmentally friendly. The new approach also promises devices that use less energy, are more responsive and don’t tarnish the air.

The main problem with phone screens has been that indium tin oxide, which is currently used to make smartphone screens, is brittle and expensive. The primary constituent, indium, is a rare metal that is ecologically damaging to extract. Sliver has been shown to be the best alternative to indium tin oxide, but is also expensive. The breakthrough from physicists at the University of Sussex has been to combine silver nanowires with graphene, a 2D carbon material. The new hybrid material matches the performance of the existing technologies at a much lower cost.

The way in which these materials are assembled is new. Graphene is a single layer of atoms that can float on water. By creating a stamp, the scientists can pick up the layer of atoms and lay it on top of the silver nanowire film in a pattern. The stamp itself is made from polydimethylsiloxane, the same silicon rubber used in kitchen utensils and medical implants.

"While silver nanowires have been used in touch screens before, no one has tried to combine them with graphene. What's exciting about what we're doing is the way we put the graphene layer down. We float the graphene particles on the surface of the water, then pick them up with a rubber stamp, a bit like a potato stamp, and lay it on top of the silver nanowire film in whatever pattern we like. "And this breakthrough technique is inherently scalable. It would be relatively simple to combine silver nanowires and graphene in this way on a large scale using spraying machines and patterned rollers. This means that brittle mobile phone screens might soon be a thing of the past,” said Professor Alan Dalton.

"The addition of graphene to the silver nanowire network also increases its ability to conduct electricity by around a factor of ten thousand. This means we can use a fraction of the amount of silver to get the same, or better, performance. As a result, screens will be more responsive and use less power,” he continued.

Dr. Matthew Large, lead researchers on the project from the school of Maths Physical Science at the University of Sussex, commented, “Although silver is also a rare metal, like indium, the amount we need to coat a given area is very small when combined with graphene. Since graphene is produced from natural graphite - which is relatively abundant - the cost for making a touch sensor drops dramatically."

"One of the issues with using silver is that it tarnishes in air. What we've found is that the graphene layer prevents this from happening by stopping contaminants in the air from attacking the silver. "What we've also seen is that when we bend the hybrid films repeatedly the electrical properties don't change, whereas you see a drift in the films without graphene that people have developed previously. This paves the way towards one day developing completely flexible devices,” he said.

A paper on this research was published in the American Chemical Society journal Langmuir.