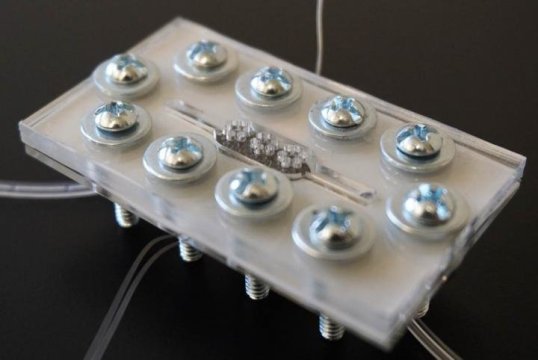 A group of researchers from the State University of New York at Binghamton have developed a microfluidic lab-on-a-chip that generates energy to power medical devices. This miniaturized biological solar cell (or micro-BSC) could provide continuous power to stand-alone, independent point-of-care devices.

Developed by professor Seokheun Choi and Ph.D. candidate Lin Liu, the cell, embedded into a microfluidic component, generates high power density and can deliver power continuously for a longer period than any existing biological cell.

The technique used by the researchers resembles a natural process. In natural ecosystems, living species and non-living elements work together to maintain the environment and to function as one environmental unit. The microfluidic device designed by Choi and Liu plays the role of the environment that sustains the ecosystem. The energy generated by the micro-BSC comes from microbial photosynthesis and respiratory activities, offering a clean, renewable and self-sustaining source of energy.

Until now, it was not practical to harvest the energy from natural ecosystems because the energy produced is too small ( in the order of nW/cm2), and its lifetime was very short (one or two hours).

"Micro-BSCs can continuously generate electricity from microbial photosynthetic and respiratory activities over day-night cycles, offering a clean and renewable power source with self-sustaining potential," said Choi. "However, the promise of this technology has not been translated into practical applications because of its relatively low power and current short lifetimes."

"The device will release biological photo-energy conversion technology from its restriction to conceptual research and advance its translational potential toward practical and sustainable power applications for point-of-care diagnostics to work independently and self-sustainable in limited-resource and remote regions," he added.

The research results were reported in the journal Lab on a Chip. An abstract can be found here: http://pubs.rsc.org/en/Content/ArticleLanding/2017/LC/C7LC00941K#!divAbstract