Miniaturization of electronic components and tightly integrated circuit design has resulted in concentrated heat generation within confined spaces onboard flight vehicles. To prevent temperatures from rising past operating limits and causing component failure, high levels of thermal energy must be dissipated. Thermally conductive adhesives transfer heat away from sensitive electronics while simultaneously securing components to the board by creating strong bonds.

Adhesives used in aerospace applications are exposed to harsh operating conditions. They must be able to withstand thermal cycling between temperature extremes while exhibiting good thermal and mechanical properties such as high thermal conductivity and low coefficient of thermal expansion. 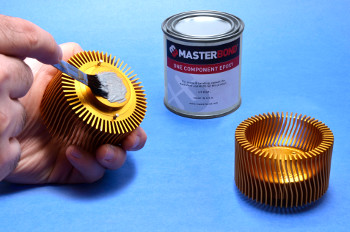 Thermally conductive adhesives are used in a variety of applications, including bonding electronic components to circuit boards, attaching heat sinks to semiconductors, and potting or encapsulating sensors. Avionics equipment is comprised of myriad miniature electronic components such as capacitors, resistors, diodes, and transistors as well as special purpose chips such as operational amplifiers and processing units. Thermally conductive adhesives serve the dual purpose of holding these components in place while facilitating heat dissipation. They are also used to seal lids onto semiconductor chips. Die attach and lid seal adhesives serve as the thermal interface between a chip die and heatspreader, sealing the lid and conveying heat away from the die.

Potting or encapsulation of sensors with thermally conductive adhesives provides protection from moisture, contaminants, and environmental shock and vibration in addition to transferring heat. Encapsulation involves fully covering the component with the potting compound. The coefficients of thermal expansion of the potting compound and the substrate should match to avoid damage to components when temperatures rise. If the coefficients differ by a significant margin, the component could fracture when exposed to rising temperatures.

While aerospace adhesives require a certain level of flexibility to prevent damage to the bonded components, the tensile modulus and shear stress strength should be sufficiently high to ensure the bond remains mechanically secure. At the same time, to allow rework of a failed component, the mechanical properties should be low enough for the component to be separated from the board without causing damage to the assembly. Typical values of tensile modulus and shear strength for flexible thermally conductive aerospace adhesives range from 1,000 to 100,000 and 100 to 500 pounds per square inch, respectively. 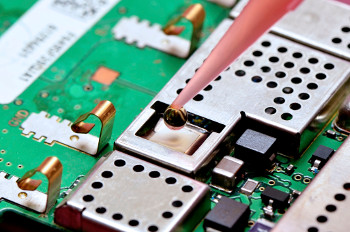 Traditionally, adhesives were thought to have good electrical insulating properties but inferior heat conduction. Today, however, epoxies, polyurethanes and silicone resins can be filled with thermally conductive ceramic or metallic particles that improve the base polymer’s bulk thermal conductivity. The dimensions and density of distribution of the particles throughout the adhesive will affect the thermal conductivity of the material. The proportion of filler to base epoxy material affects the overall strength of the bond. Adhesives with a large amount of filler may have superior thermal conductivity, but impaired bond strength.

Adhesives in space applications are exposed to extreme operating conditions. Temperatures range from the cryogenic environments of experiments on the International Space Station to the blistering heat of probes traveling near Mercury and the sun. Satellites in geostationary orbits are bombarded by ionizing radiation, while those in low Earth orbit are subjected to highly reactive atomic oxygen.

Outgassing is a characteristic of aerospace adhesives that must be minimized. Outgassing occurs when volatile materials in the adhesive are released as gas. This material can then condense as a film onto the cold surfaces of spacecraft components like windows or mirrors, obscuring vision and hindering operations. Outgassing is determined by tests to measure the amount of volatile content lost by an adhesive. NASA ASTM E595 is the industry standard for measuring outgassing in adhesives and involves exposing the material to a vacuum at 125 degrees Celsius for 24 hours. To be considered a low outgassing material suitable for use in space, products must have a total mass loss (TML) of less than 1 percent, as well as less than 0.1 percent of collected volatile condensable materials (CVCM) at the end of 24 hours of vacuum exposure.