Stretchability and compressibility of supercapacitors are essential elements of modern electronics, such as flexible, wearable devices. Widely used polyvinyl alcohol-based electrolytes are neither very stretchable nor compressible, which limits the realization of suitable supercapacitors. 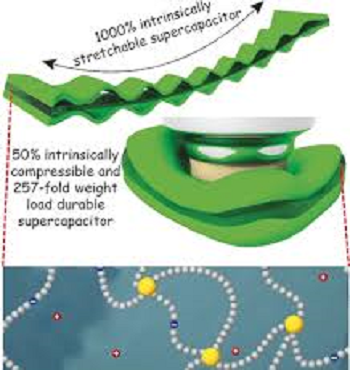 Chinese researchers have developed a new electrolyte that is intrinsically super-stretchable and compressible. Vinyl hybrid silica nanoparticle cross-linkers were introduced into polyacrylamide hydrogel backbones to promote dynamic cross-linking of the polymer networks. The cross-linkers serve as stress buffers to dissipate energy when strain is applied, providing a solution to the intrinsically low stretchability and compressibility shortcomings of conventional supercapacitors.

To assemble a working supercapacitor with this polyelectrolyte, two identical carbon nanotube composite paper electrodes were directly paved on each side of the pre-stretched polyelectrolyte film. Upon release, a wavy, accordion-like structure developed, which enhanced electrochemical performance with increasing strain.