Sensors that detect motion, position, rotation, and the presence of objects are essential in hundreds of applications, from aircraft to elevators, garage doors to vehicles, and in the equipment used on every production line. However, as they’re small and unassuming and their actions are taken for granted, they tend to blend into the background, unseen but essential. Two sensor types, inductive and magnetic, represent a significant portion of these devices, but a hybrid type called the magneto-inductive sensor is rapidly becoming popular. It combines the advantages of inductive and magnetic sensors while providing benefits that neither alone can achieve. To see why this is so, it’s necessary to understand how all three sensor types work.

An inductive sensor essentially functions either as a switch or a linear sensor. A voltage is applied to a coil that creates an electromagnetic field in front of the sensor (Figure 1), and if a conductive metal “target” enters this field, eddy currents induced by this field are created, reducing the field’s strength as it approaches. When they decline to a pre-defined threshold, the sensor outputs a linear signal, triggering the switch. Inductive sensors are simple, reliable, and rugged, but they can detect only metal objects, and, although relatively insensitive to low-frequency magnetic fields, even a very small amount of metal between the target and sensing element can reduce their effectiveness. 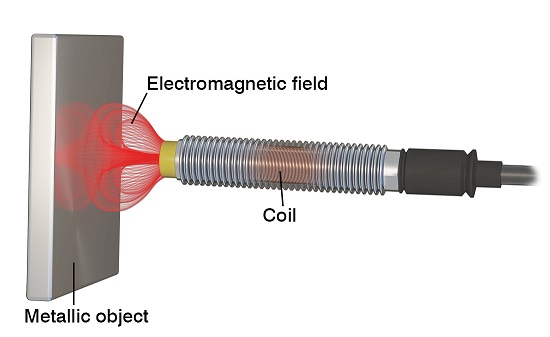 Figure 1: A voltage applied to a coil in an inductive sensor creates an electromagnetic field. (Source: Micro-Epsilon)

There are several technologies employed to create magnetic sensors, many of which rely on the Hall effect, where the output voltage of a transducer changes in response to variations in a magnetic field (Figure 2). When current flows into a material, electrons move through it in a nearly straight line, but if a force acts on them, they will deviate from this path. The amount of deviation is directly proportional to the amount of current and the strength of the magnetic field. 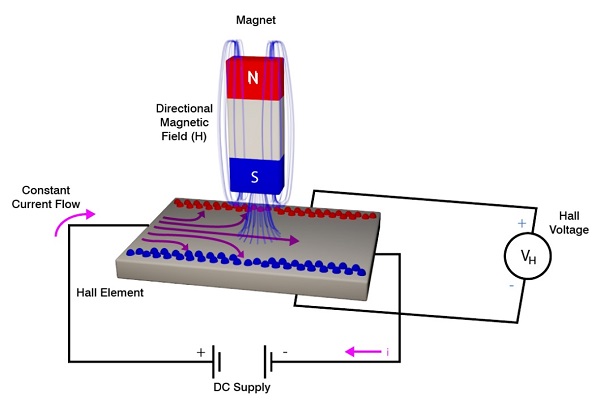 The magneto-inductive mainSENSOR developed by Micro-Epsilon combines aspects of inductive and magnetic sensors but uses proprietary techniques that build on their inherent strengths, minimizes their disadvantages, and provides advantages over both individually. A comparison of all three techniques is shown in Table 1. Like an inductive sensor, when an alternating current is supplied to a sensor coil, a magnetic field induces eddy currents in the conductive target placed in front of it. 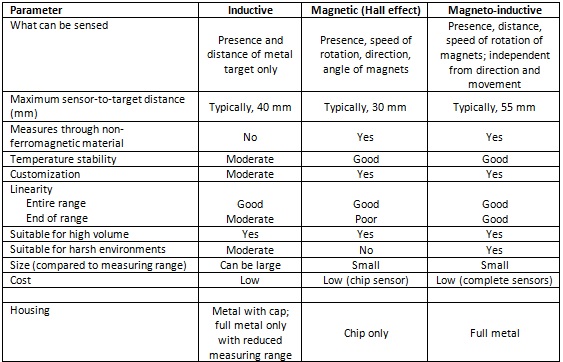 However, by placing a special film in the eddy current field, the field is attenuated in direct proportion to its field strength, producing a linear relationship between the distance from the sensor to the magnet (and the resulting output signal). As printed coils are used in the sensor element, no semiconductor devices are required, simplifying the design. Measurement range is typically from 20 mm to 55 mm and custom solutions can increase this to about 55 mm. Even over this large measurement range, a very small change of the magnet position can still be detected. The measurement range can be customized by simply changing the magnet size and strength.

A mainSENSOR can measure through any non-ferromagnetic material (Figure 3), including aluminum or stainless steel, so it can be used in pressure-tight containers and closed systems. It has high temperature stability, and when combined with a microprocessor, can produce a digital output compatible with pulse width modulation (PWM), CAN bus, and other digital communication standards. 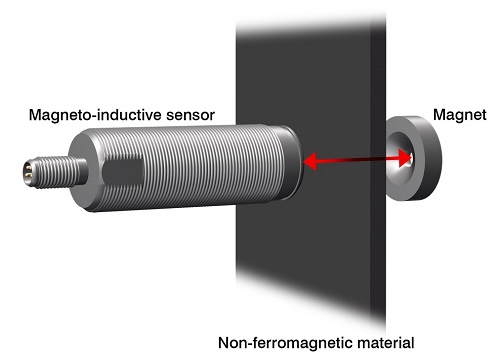 Unlike magnetic sensors based on the Hall effect, the mainSENSOR’s measurement capability is linear throughout its measurement range (Figure 4) rather than only a portion of it. This high linearity is achieved through a process called "self-linearization," allowing it to provide a linear response even at the limits of the measurement range. A compact PC board contains the sensor element and signal preparation, signal evaluation, and signal output. As it is a separate assembly, the sensor can be located in protected areas while the magnet can be placed in harsh environments. 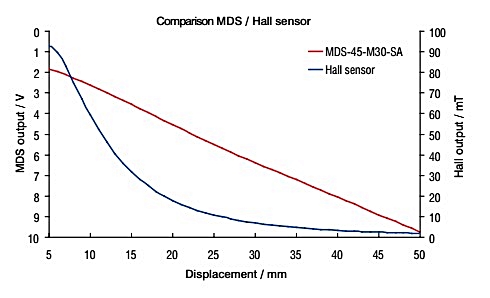 Figure 4: One of the most important advantages of the mainSENSOR (in this case the Model MDS-45-M30-SA) is its high linearity and sensitivity even with large measurement ranges. (Source: Micro-Epsilon)

Flexibility in mounting the magneto-inductive sensor

Micro-Epsilon’s magneto-inductive sensors can be applied in many different applications. In the case of non-ferromagnetic objects, the sensor can either be countersunk, flush-mounted, or protruding without any effects on the measurements (Figure 5). The magnet is mounted to the measurement object using a stainless steel screw, which is supplied with the sensor. 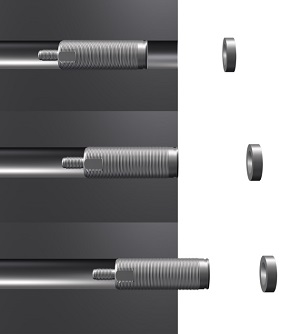 The mainSENSOR detects the position of a magnet, which is fixed to the measurement object. The magnet can be applied to the sensor either axially or side-on (Figure 6). Especially in the case of limited installation spaces, side-shifted measurement offers a space-saving alternative.

Figure 6: A unique feature is the possibility for axial and radial measurement alignment of the magnet. In limited installation space this enables new aspects of using a displacement sensor. (Source: Micro-Epsilon)

The mainSENSOR allows designers’ significant flexibility for incorporation into a system. For example, sensors can be arranged in rows to measure long distances in applications such as the damper in a washing machine, in which the sensor is placed outside on the damper and detects vibration of the drum via an integrated magnet.

The PC board can be modified to meet specific requirements, including distance or speed measurement, accuracy, and required frequency response. Communications interfaces can be selected to produce current, voltage, PWM and others, and signal conditioning can be provided to achieve the best price/performance ratio. One family within the mainSENSOR product line provides a rectangular output signal in which the distance signal is proportional to duration or frequency, depending on the magnet.

The housing, material, and protection class can also be changed so that, for example, in space-constricted environments, a side-shifted measurement can be employed to save space. If the sensor is to be used in a harsh industrial environment, it can be housed in a sealed stainless steel enclosure that withstands high pressure, dirt, aggressive chemicals (acids), and solvents. Finally, for rotational speed measurements of ferromagnetic objects such as toothed racks, the sensor can be pre-tensioned with the magnet integrated within the housing.

Inductive and magnetic sensors have served scores of applications well for many years and will continue to do so. However, the mainSENSOR magneto-inductive sensor developed by Micro-Epsilon combines the inherent strengths of both types while increasing measurement accuracy over a wider range, can be widely customized, can measure through non-ferromagnetic materials, is very compact, and can be used in virtually any type of environment. These benefits and others essentially make it a new type of sensor for both traditional applications and new ones as well.