Unlocking the Potential for Nanomachines Through 3-D Printing

Nanomachines are already in development to help deliver medication to patients or serve as computer memories at a nanometer scale, but researchers at Dartmouth College through the use of 3-D printing have come up with a way to harness these mini-machines even further.

The ability to transform microscopic nanorings into smart materials that perform work at a human scale offers new potential for nanomachines that could be designed and fabricated into smart, complex devices.

“Up until now, harnessing the mechanical work of nanomachines has been extremely difficult. We are slowly getting closer to the point that the tiny machines can operate on a scale that we can see, touch and feel,” said Chenfeng Ke, assistant professor of chemistry at Dartmouth College. 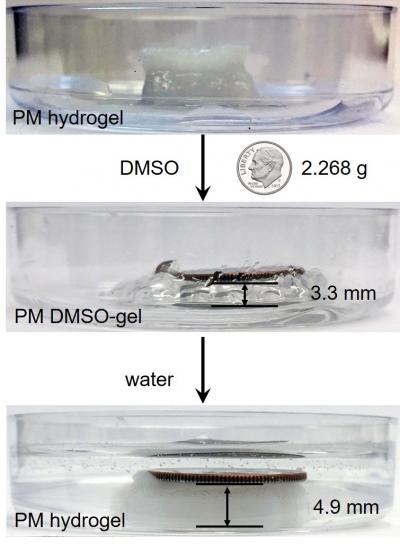 A 3-D printed gel structure lifts and lowers a coin when exposed to water and a DMSO solvent. Source: Dartmouth University Researchers were able to use the material they created to lift a U.S. dime weighing 2.268 grams. The coin -- 15 times the weight of the structure that lifted it -- was raised 1.6mm, which researchers say is the equivalent of a human lifting a car.

The design of the material is based on research that turned mechanically interlocked molecules (MIMs) into work-performing machines at nanoscale. MIMs are widely used as molecular shuttles, switches, muscles and pumps, but much of this work has encountered a problem of ordering their random positions. A key to the Dartmouth research was to establish an order so the structures don’t cancel each other’s mechanical movement out, so the molecular motions can be amplified.

“Our work provides the first design principle to add 3-D printability to nanomachines. Importantly, we have also transformed molecular motions to macroscale to do useful work," said Ke.

The team designed and synthesized MIM-based gels with properties desirable for 3-D printing. They were able to successfully print lattice-like 3-D structures using hydrogen bonding interactions between nanorings. According to the researchers, by crosslinking the axles, structures with good 3-D structural integrity and mechanical stability were created.

They found that these 3-D structures were able to be reversibly deformed and reformed through solvent exchange that switches the threaded ring structure between random shuttling and stationary states at the molecular level. They were able to repeat the process many times.

“Just like moving beads to strengthen or weaken a string, this action is critical because it allows the amplification of molecular motion into macroscopic motion through the conversion of chemical energy input into mechanical work,” said Qianming Lin, a first-year graduate student in the Department of Chemistry at Dartmouth College.

Researchers believe this development could be used as soft robots that complete complicated tasks similar to the human hand.