Amazon has been toying with the idea of having unmanned aerial vehicles (UAVs), better known as flying drones, deliver packages to homes for a number of years. However the online retail giant may now be going one step further after filing for a patent that would allow drones to deliver packages from a floating airship warehouse.

The zeppelin-ish airborne fulfillment center would soar as high as 45,000 feet in the air, and would deploy delivery drones filled with Amazon products to customers in the area where the airship would be located. Other smaller airships would then return the drones back to the main warehouse, where more inventory would be equipped. 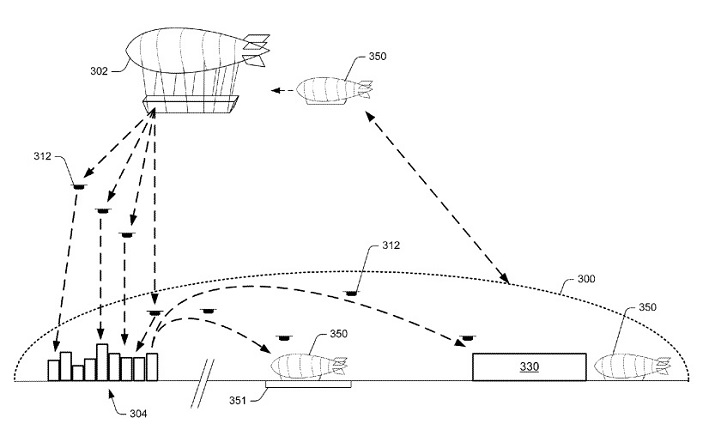 An illustrated image included in the patent filing of what Amazon’s floating warehouse may look like. Source: Amazon In the patent filings, Amazon makes the case that the delivery drones would be able to nearly immediately deliver goods to people if deployed near a sports stadium—for team merchandise or snacks. The drones would have a larger delivery range if deployed from the air and consume less power because they would descend to deliver packages rather than accelerate into the air from the ground.

Also in the filings, Amazon says that because the airship would be mobile, it could change locations to better serve customers, depending on weather conditions, expected demand or actual demand.

This is obviously only a patent, and not much else is known about the plans for the airship delivery system. Companies are famous for filing for patents and never actually following through with the development of the technology or product.