Zebrafish Attracted to Robotic Models of Themselves

If you saw a 3-D-moving robot of yourself, you’d probably want to hang out with it-- right?

Zebrafish seem to have similar motivations. Researchers at the New York University Tandon School of Engineering have discovered that zebrafish tend to engage more with moving robotic models rather than robots that are static. 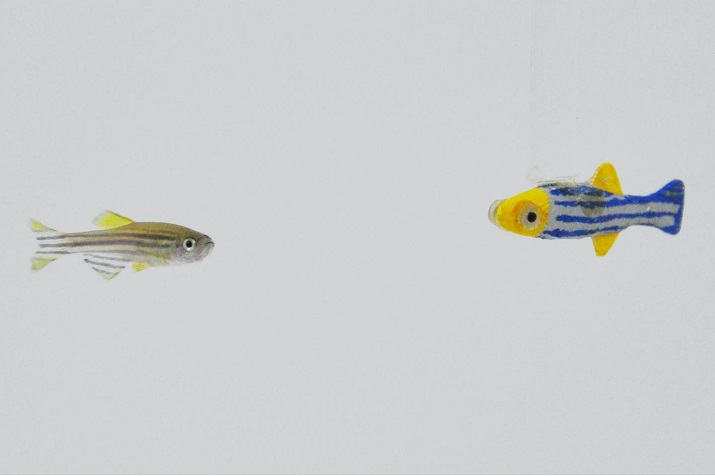 A 3-D printed zebrafish robot that mimics the movement of a live fish was much more appealing than one that didn’t move or didn’t look like a zebrafish. Source: NYU TandonThe goal is to learn more about freshwater fish behavior in order to understand their social behavior and then use that information in order to explore human disorders such as anxiety, addiction, autism and schizophrenia. Zebrafish are useful because they are versatile and are increasingly taking the place of more complex animals in behavioral studies.

How They Tested It

The researchers developed a controllable, customizable robotic platform to create 3-D printed replicas to mimic the swimming patterns of real fish. They introduced the live zebrafish in the middle section of a three-compartment tank with robotic fish and an empty section on either side. They then compared the response of the fish with the 3-D moving replicas, 2-D moving replicas, a static replica, a transparent replica and a non-moving rod.

The tests showed that the zebrafish were attracted to a robot that mimicked both the appearance and the motion of real fish and the attraction was lost when a robot fish was either didn’t mimic the fish or didn’t look like the fish.

“The fish, when presented with the choice between a static robot and one that was moving in 3-D and beating its tail, preferred to spend time with the latter. This clarifies the important role motion plays in influencing zebrafish behavior,” said Maurizio Porfiri, professor of Mechanical and Aerospace Engineering, at NYU Tandon. “These experiments also significantly refined the robotic platform that enables consistent, repeatable tests with our live subjects.”