Researchers from the University of California - San Diego have created a device that uses light to manipulate its mechanical properties.

The device, which resembles a tiny capacitor and developed using a plasmomechanical metamaterial, runs on a mechanism that joins its optical and mechanical resonances and allows it to oscillate indefinitely using energy that's absorbed from light.

The new research demonstrates a new approach to developing optically-driven mechanical oscillators. The device has potential applications in GPS, computers, and wristwatches, as a new frequency reference to accurately keep time. Other possible uses include high precision sensors and quantum transducers. 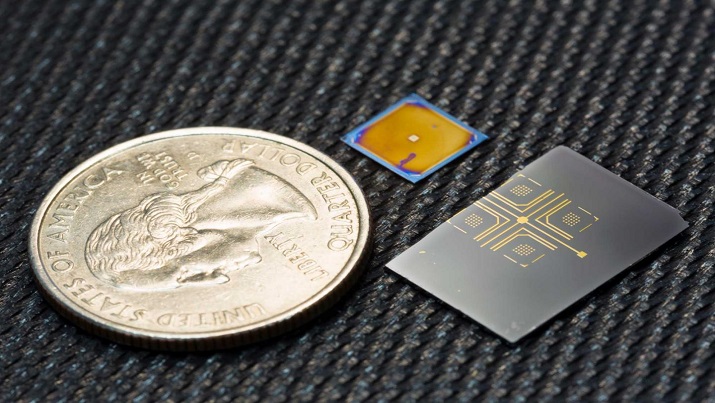 Researchers designed the metamaterial-based device by integrating tiny light absorbing nanoantennas onto nanomechanical oscillators and proved how efficient interactions between light and matter could be harnessed for use in nanoscale devices.

Metamaterials, artificial materials that are engineered to exhibit exotic properties not found in nature, are typically considered "lossy" because their metal components absorb light very efficiently.

"The lossy trait of metamaterials is considered a nuisance in photonics applications and telecommunications systems, where you have to transmit a lot of power. We're presenting a unique metamaterials approach by taking advantage of this lossy feature," said Ertugrul Cubukcu, a professor of nanoengineering and electrical engineering at the University of California San Diego.

The device in this study, which was about the size of a quarter, consisted of two square plates 500 microns by 500 microns. The top plate was comprised of a bilayer gold/silicon nitride membrane containing an array of cross-shaped slits--the nanoantennas--etched into the gold layer and the bottom plate was comprised of a metal reflector separated from the gold/silicon nitride bilayer by a three-micron-wide air gap.

When the researchers shone light on the device, the nanoantennas absorbed all of the incoming radiation from light and converted that optical energy into heat. As a result, the gold/silicon nitride bilayer bent because gold expands more than silicon nitride when heated. The bending of the bilayer altered the width of the air gap and separated it from the metal reflector

This change in spacing caused the bilayer to absorb less light and as a result, the bilayer bends back to its original position. The bilayer can once again absorb all of the incoming light and the cycle repeats over and over again.

Since the plasmomechanical metamaterial can efficiently absorb light, it can function under a broad optical resonance. According to the researchers, that means this metamaterial can potentially respond to a light source like an LED and won't need a strong laser to provide the energy.

"Optical metamaterials enable the chip-level integration of functionalities such as light-focusing, spectral selectivity and polarization control that are usually performed by conventional optical components such as lenses, optical filters and polarizers. Our particular metamaterial-based approach can extend these effects across the electromagnetic spectrum," said Fei Yi, a postdoctoral researcher who worked in Cubukcu's lab.