A breakthrough in the nascent field of metatronics has recently been reported in Physical Review Letters. The paper (Phys. Rev. Lett. 111, 073904 - 2013) details the successful creation of metatronic circuits in the technologically important near-infrared region (NIR). These NIR-lumped nanocircuits are analogous to traditional electrical circuits in function, but use light instead of electricity and produce a tailorable response by modifying the geometry and structure of the nanostructures used to create the circuits. NIR is an important region of the optical spectrum because it corresponds to the wavelengths that are found in fiber optic communications.

It was in 2005 (Phys. Rev. Lett. 95, 095504 - 2005) when the idea of using nanometer-scale metamaterial structures and particles for optical information processing was first proposed by Nader Engheta, the H. Newill Ramsey Professor at the University of Pennsylvania, and his collaborators. Engheta explained, “Optics has always had its own analogs of elements, things like lenses, waveguides and gratings, but they were never lumped [grouped together into a single element]. Those elements are all much larger than the wavelength of light because that’s all that could be easily built in the old days. For electronics, the lumped circuit elements were always much smaller than the wavelength of operation, which is in the radio or microwave frequency range. If we have the optical version of those lumped elements in our repertoire, we can actually make designs similar to what we do in electronics—but now for operation with light. We can build a circuit with light.”

To achieve these lumped elements, Professor Engheta turned to metamaterials. Metamaterials attain their unique optical properties from their very specific periodic structures. In this case, a metamaterial consisting of indium tin oxide nanorods and air gaps acts on the light to produce a lumped circuit effect. 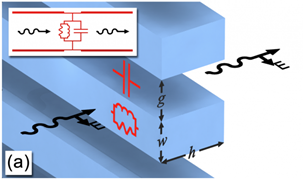 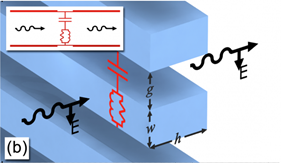 The promise of metatronics is smaller, faster, light-based information processing, but there is still much work to be done. However, achieving working lumped circuits in the NIR regime is a significant breakthrough and moves the field a step closer to useful applications.