Diodes Incorporated announced a new family of high-performance, unipolar, Hall-effect switches designed for operation over a supply range of 3 V to 28 V in consumer and industrial applications. The AH337x series of four devices feature open-drain outputs in varying sensitivities, from +30 G to +115 G, while the high-sensitivity AH3782 has an internal pull-up on its output. Typical applications include position and proximity sensing, open and close detection, contact-less switches, level detection and flow meters. Markets span home appliances, consumer personal care products, office equipment, and industrial position and speed measurement, such as valve- position sensing. 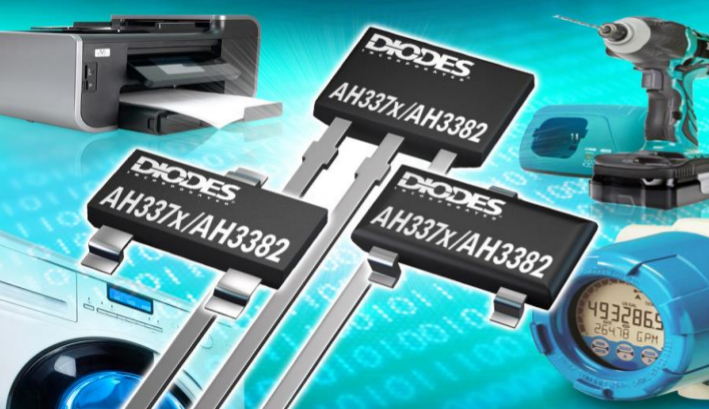 Diodes Incorporated's AH3372, AH3373, AH3376, AH3377 and AH3782 Hall-effect devices provide contact-less switching and can be used in a variety of applications, including position and proximity sensing, level detection and flow metering. Image source: Diodes Incorporated. The devices' outputs switch on in the presence of a magnetic south pole of sufficient strength to the part-marking surface for SOT23 and SIP3, while SC59 packaged devices work with the opposite pole for the same effect.

These Hall-effect switches utilize a chopper-stabilized architecture with an internal bandgap referenced to achieve reliable operation over a wide –40° C to +125° C temperature range with minimal switching point drift. They offer a fast response to power-on and changes in magnetic flux density, and feature a reverse-blocking diode, Zener clamps on the supply and output, and output over-current limiting to provide device protection and high ESD immunity.

The AH3372, AH3373, AH3376, AH3377 and AH3782 are offered in three-pin SOT23 and SIP-3 packages, and also an SC59 package that provides the option of switching with a magnetic north pole. For further information, visit the Company's website at www.diodes.com.