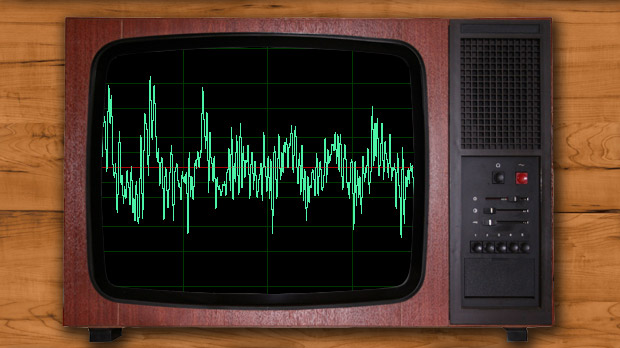 Underutilized spectrum situated between vacant TV channels is being targeted by regulators and the global electronics industry for the next wave of broadband wireless services. While the opportunities are significant for the development of this so-called “white space” spectrum, there are risks for OEMs and chip vendors alike.

The U.S. Federal Communications Commission (FCC) website calls the white space spectrum “a valuable opportunity for our changing wireless mobile landscape.” It is overseeing efforts to use the vacant airwaves in the nation’s 210 local TV markets for unlicensed applications such as Gigabit Wi-Fi. The agency’s white space initiative is about “expanding broadband capacity and improving access for many users,” according to the FCC.

Those efforts also seek to promote new spectrum-sharing technologies designed to increase utilization of scarce spectrum while preventing interference with licensed operations. Recently, the FCC moved to meet the growing demand for wireless spectrum with a rulemaking that would free up 195 MHz of new spectrum for Wi-Fi in the 5 GHz band. Among other things, the proposal would allow more unlicensed devices operating in the crowded 2.4 GHz band to shift to 5 GHz.

On February 19, Taiwan phone maker HTC announced the HTC One, a smartphone that appears to be the first capable of operating in the 5-GHz band using the latest Wi-Fi spec, IEEE 802.11ac.

“Wi-Fi congestion is growing,” FCC Chairman Julius Genachowski stressed during a commission meeting on the Wi-Fi plan last month. “We know we have to do something about it and the 5 GHz band is the best place” to start.

Spectrum demand is driven by the sheer number of mobile devices being connected to existing networks. The FCC estimates that 51 million new devices were added last year, pushing the total to an estimated 424 million devices in the U.S. alone. Meanwhile, network equipment makers like Cisco estimate that 33 percent of cell traffic is being offloaded to unlicensed Wi-Fi networks. That total is expected to increase to 46 percent by 2017.

While white space is prime spectrum for new unlicensed wireless devices, it remains “stuck in between two very large and very powerful lobby groups” – licensed and unlicensed users, said Daniel Gleeson, mobile analyst with IHS. “Any company trying to build a business case based on white space is taking a bet on the future of the TV and mobile industries and not just their own business,” he said.

The FCC has thus far adopted rules allowing unlicensed radio transmitters to operate in white spaces in hopes of creating “super Wi-Fi” networks, or what Google co-founder Larry Page has called “Wi-Fi on steroids.” Some mobile devices also can operate in TV white spaces without a license. Meanwhile, the FCC is formulating rules for “incentive” auctions expected to begin next year.

Recently, the agency was deluged with comments from stakeholders on how the auction should be structured and how unlicensed white space services would be rolled out. In their comments, incumbent white-space players like Verizon emphasized the need to prevent interference with their LTE and other networks operating on licensed spectrum. Challengers such as Google and Microsoft countered that agile chip technologies and accompanying software promised to alleviate long-standing concerns about interference between licensed and unlicensed services. 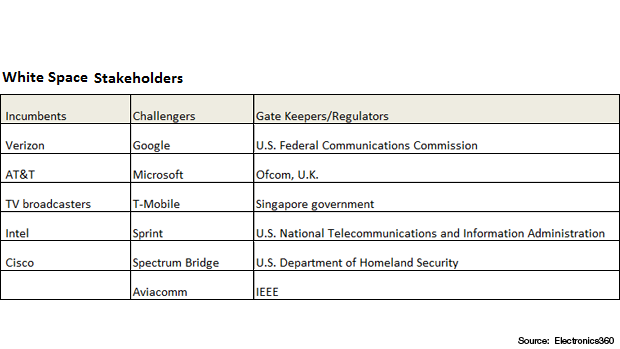 Unused white space spectrum is coveted because of its superior propagation characteristics that allow signals to travel farther and penetrate walls. Along with juiced Wi-Fi hotspots, the technology is being touted as a way to reduce congestion on existing networks while enabling applications in telehealth, video streaming and grid management including smart metering.

“The potential uses are limited only by the imagination,” the FCC declared in September 2010 when announcing plans to open up white space airwaves for unlicensed wireless devices.

Regardless of location, those devices would use geo-location technologies along with an FCC database to operate on unused TV channels across the U.S. A similar approach is being adopted in the U.K., which has led European efforts to leverage white space spectrum.

Getting products to market

While the use of unlicensed wireless spectrum would be free, current and potential carriers would still have to invest billions in new networks and applications. Meanwhile, OEMs must develop new devices based on agile chipsets that could leverage white space spectrum, betting that emerging standards pan out and that an ecosystem will emerge.

One of the keys to infrastructure investment and deployment is simply getting white space products to market, says IHS analyst Gleeson. Those early products may not be the best or cheapest, but Gleeson said they would provide a measure of technological certainty required for the major investments needed to capitalize on white spaces.

A white spaces ecosystem is beginning to emerge, especially for Internet of Things applications. A U.K.-based industry group promoting the “Weightless” open network standard rolled out what it claims is the first transceiver chip based on the Weightless spec that is capable of operating over UHF TV white space spectrum (470 to 790 MHz). The group estimates there will be as many as 50 billion connected devices by 2020.

Cambridge-based startup Neul Ltd unveiled its Iceni chipset in February saying it is making it available to as many as a dozen “select partners” for testing and development of white space silicon initially targeting machine-to-machine (M2M) communications. The chipset is expected to cost less than $2.

Neul’s design team cut its teeth designing Bluetooth chipsets at consumer electronics silicon vendor CSR, which is expected to be among the “major chipset suppliers” developing white space chips based on the Weightless standard. Version 1.0 of the spec is scheduled for release in April, and proponents hope a stable version of the standard will help fuel silicon development.

ARM and other promoters of the Weightless spec said the new silicon could allow OEMs to begin designing chips based on the standard for new M2M applications. Webb said in an interview that white space spectrum is ideal for M2M applications because it is “globally harmonized” and eliminates the need to construct special wireless networks.

To hasten the roll out of new wireless spectrum, the FCC has shifted its approach from simply clearing and reallocating spectrum to enabling flexible use. “Spectrum sharing will become an increasingly important tool in our toolbox” while leveraging emerging wireless technologies to “turbocharge [spectrum] sharing not only in frequency and space but also in time,” Genachowski said.

The U.K.’s communications regulator, Ofcom, has largely followed the FCC lead, establishing geo-location databases for unlicensed use of white space spectrum. Webb said other regions are also likely to adopt the FCC’s approach on white space implementation, providing potential vendors with the regulatory certainty they would need to achieve the massive economies of scale to produce the billions of chipsets that would be needed for M2M applications.

Singapore, for example, is leading the M2M charge in Asia as part of its smart city initiative. The city-state has deployed a test wireless system and is expected to free up white space spectrum as early as this year. Other Asian countries such as Malaysia are also ramping up plans to use white space for emerging wireless applications such as Wi-Fi and M2M.

China remains a mystery, Webb said, hence the focus of groups like his is on the “low-hanging fruit” in Europe, North America and other Asia-Pacific countries.

Webb acknowledges that one risk for chipmakers and OEMs is that proposed white space standards won’t pan out. For instance, specifications that seem to reflect a hard-won industry consensus are simply overtaken by emerging technologies or by unforeseen markets shifts.

Another wild card will be the role played by U.S. wireless carriers. Verizon spokesman Edward McFadden stressed that “our real concern is to make sure there is no interference” between unlicensed white space and Verizon’s current networks, especially its 4G LTE networks.

“The guard bands [used to prevent interference between adjacent services] need to be more robust” before unlicensed uses of white space are approved, McFadden said.

In a January letter to the FCC, a coalition of wireless carriers, broadcasters and chip makers, including Qualcomm and Intel, urged the agency to lay out its requirements for organizing wireless and TV operations in the 600-MHz band where white space spectrum resides. The group concluded that maximizing spectrum for new wireless services while minimizing interference “is indeed a difficult task.”

As stakeholders await what they hope will be final regulatory action on white space implementation from the FCC, emerging players Google and Microsoft are working with chip makers to develop the agile infrastructure needed to utilize scarce spectrum while encouraging spectrum sharing without interference.

“It’s pretty clear that [Google and Microsoft] are partnering with equipment makers” as they contemplate how to build super-charged Wi-Fi networks, said Catherine Sloan of the Computer & Communications Industry Association, which is promoting unlicensed white space deployment on behalf of members like Google, Microsoft, T-Mobile and Sprint. With spectrum scarce, “everything has to be packed tighter,” she said.

Groups like the Wireless Innovation Alliance, which includes Google and Spectrum Bridge, argue that greater use of unlicensed spectrum “provides a crucial platform for ‘innovation without permission.’”

These stakeholders downplay concerns about potential interference from unlicensed wireless services in white space frequencies, arguing instead that device technology and other tools have advanced to the point that interference is less of an issue than incumbents like Verizon make it out to be.

For example, Spectrum Bridge is touting a “White Space Plus” approach it claims can mitigate interference among devices connected to different wireless nets with overlapping coverage. The approach allows unlicensed operators to track devices using overlapping channels and shift them to other available channels to reduce interference.

“The problems are not technical, they’re political,” said Maura Corbett, a Beltway consultant who is aiding the push for unlicensed use of white space spectrum. “This is not a zero-sum game,” Corbett added, “we need both” licensed and unlicensed spectrum.

Congested urban networks pose a tougher problem. “While white space spectrum would have the potential to provide many great services,” Gleeson said, “the constant risk of interference would be a hindrance.”