Chuck Heschmeyer
A recent advancement in biotechnology may pave the way for an electronic sensor that can rapidly detect and classify bacteria for medical diagnostics and food safety. 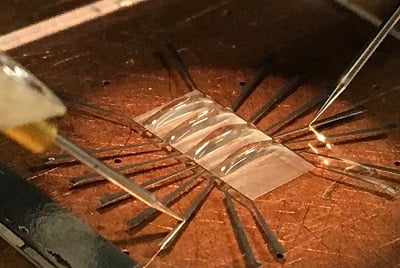 A new type of electronic sensor may lead to devices that detect and classify bacteria for medical diagnostics and food safety. Source: Purdue University/Aida Ebrahimi Researchers at Purdue University have developed a droplet sensor that can detect whether bacteria are dead or alive. It works by detecting changes in electrical conductivity in droplets containing bacteria cells.

Conventional laboratory bacteria analysis requires that samples be cultured for hours or even days to grow enough of the bacteria for identification and analysis. The new approach under development at Purdue might be used to create arrays of hundreds of sensors on an electronic chip, with each sensor quickly detecting a specific type of bacteria or the effectiveness of a certain antibiotic.

"We have taken a step toward this long-term goal by showing how to distinguish between live and dead bacteria," said Muhammad Ashraful Alam, professor of Electrical and Computer Engineering. "This is important because you need to be able to not only detect and identify bacteria, but to determine which antibiotics are effective in killing them."

As explained in the research, bacteria cells maintain the proper internal pressure through osmoregulation, a process in which water, salts and other molecules move across the cell membrane. As a droplet begins to evaporate on the sensor, bacteria cells contained in the droplet detect the increasingly salty environment, triggering emergency valves called osmoregulatory transporters in the cell membrane.

The cells then either take in or release water and charged molecules including salts, changing the electrical conductivity of the surrounding fluid in the droplet, which is measured by electrodes. This change in electrical conductivity varies according to whether a bacteria cell is dead or alive and also might be used to identify specific types of bacteria because they use fundamentally different osmoregulatory channels.

The hypothesis was proved by using genetically mutated cells that do not have those osmoregulatory channels and, therefore, are less effective in regulating the pressure differential, researchers said.

The sensor's surface was designed specifically to maintain the shape of a droplet, which is said to be critical for the technology to work. Two other advances making the sensor possible are the ability to measure the changing electrical conductivity in the droplet and harnessing a cell’s osmoregulation as the basis for detection.

The technology, which was tested with low concentrations of living and dead forms of E. coli, Salmonella and S. epidermidis bacteria, is said to be label-free because it does not require samples to be treated with fluorescent dyes, making it a potentially practical tool for medicine and food safety. Researchers have received a provisional patent on the concept.