Watch: New AR headset does not cause nausea or eyestrain

Researchers from the University of Cambridge’s Center for Advanced Photonics and Electronics (CAPE) have created a new augmented reality (AR) head-mounted display (HMD) that does not cause eye strain or nausea, also called cybersickness, even after hours of use.

Cybersickness has plagued HMDs since its inception. Users can feel the effects of cybersickness after 10 minutes or more of use. This feeling is caused by sensory conflict. What the eyes are perceiving, in this case an AR environment, does not match up with what the body is feeling. Some researchers think this is the body trying to get rid of a substance that it thinks is causing hallucinations. However, the new device reportedly prevents cybersickness.

The HMD is comprised of an enlarged, scalable eyebox that displays images on the retina with pixel beam scanning. The pixel beams travel parallel to each other using partially reflective beam splitters and do not disperse, ensuring the image is always in focus regardless of distance. Partially reflective beam splitters are used to split indecent light at a designated ratio into two separate beams, creating the image. The beam splitters form an exit pupil, which is a virtual opening through which light travels. The exit pupil and pixel beams produce a high-quality image that is unaffected by a change in focus. 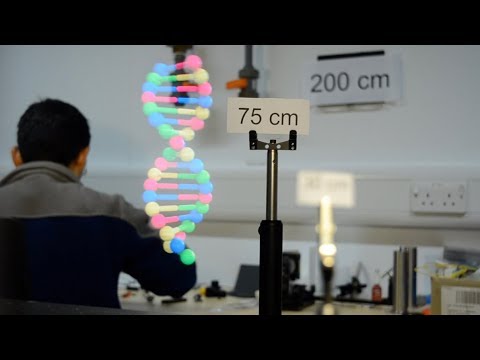 Researchers are exploring the HMD’s potential use in different applications, like training, CAD development, hospitality, data manipulation, outdoor sports, defense applications and construction. They are also looking at ways to miniaturize the HMD prototype into a glasses-based display.

A paper on the new HMD was published in Research.