Keeping Electronics Cool: Many Options, But Many Constraints As Well

Keeping electronics cool is a never-ending challenge for project teams of systems ranging from automotive infotainment, to motor drives, and to power supplies. It's a corollary of the law of unintended consequences: the advance of lower-power devices and processes has dramatically reduced dissipation and size for a given function, but in turn, the number of functions packed into an IC or system has increased significantly as well, and so dissipation issues haven’t gone away for many products.

Cooling is needed to sustain reliability – heat is the leading cause of shortened life of electronics – and to avoid inducing outright failure. The good news is that engineers have many ways to deal with excess heat; the bad news is that only a one technique or combination is a viable fit in a given application. Before we look into the cooling options, there are two questions which must always be kept in mind with any cooling discussion:

1) Is the heat problem primarily localized to an individual component (IC, processor, FET) which has excessive dissipation, and so may exceed its rating and malfunction or fail, or is the problem that the temperature of the entire device exceeds system-level rating?

2) When you use some heat-transfer technique to get the excess heat "away" from the component, device, or system, what is this mystical "away" to which you are sending the heat? If there isn’t a place to send the heat you are trying removing, your solution will fail.

•Radiation, such as the heat an incandescent bulb; in most designs, radiation is only a minor heat-removing mechanism because it requires a relatively large surface area (note that one importance exception is spacecraft, for which radiation is the only heat-dispersion path).

•Conduction, where the heat energy moves through a solid substance such as metal

•Convection, where the heat is carried away by moving fluid (air, water, or liquid such as Freon).

Most systems use a combination of conduction and convection to remove excess, undesired heat. For example, the heat within an IC package is conducted to the surface, where convection airflow carries it away. The challenge in most designs is getting that excess heat away fast enough and far enough so that the source remains sufficiently cool.

To speed up the conduction and convection process, various passive and active techniques are available. Passive is the preferred technique, if practical, since it is low cost, has zero operating cost, and is quiet and reliable.

The easiest way to enhance passive cooling is based solely on design rather than add-on components, and is a viable solution in many designs. Natural, unforced air convection can remove a significant amount of system heat, if the boards are mounted vertically (if there are horizontal, there will be very little convention; instead there will be a layer of stagnant, heated air between board, which is actually aggravates the cooling process. Placing the boards vertically is free, reliable, direct approach. 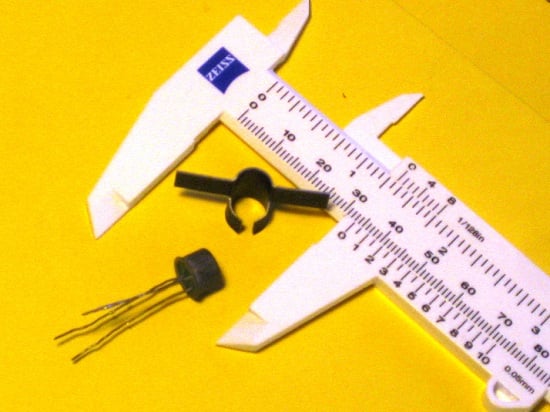 Small heat sinks made from stamped, bent sheet metal are clipped onto the can of discrete transistors. (Source: Bill Schweber) 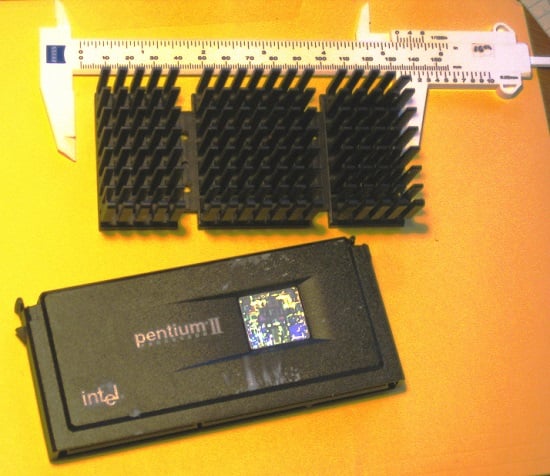 This heat sink was custom designed for use with the Intel Pentium II CPU, circa 1998. (Source: Bill Schweber) 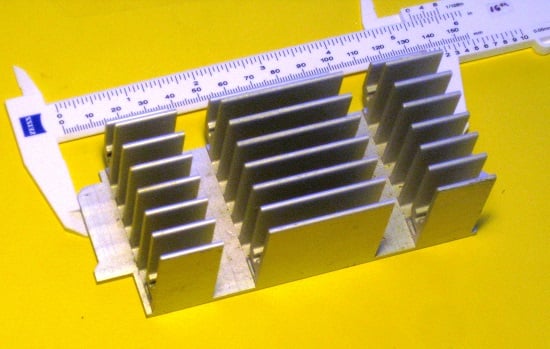 This standard catalog heat sink can be used on top of a large number of power-related modules. (Source: Bill Schweber)

Unfortunately, while it may keep a system cool, there can still be localized overheating of individual components. That's where heat sinks are a good cooling enhancer. They come in sizes ranging from fingernail for small discrete devices, to large ones for large ICs or power semiconductors, with an almost infinite number of arrangements and configurations of their cooling fins (surfaces). Heat sinks are relatively inexpensive and reliable, as there is nothing to go wrong with them other than outright mechanical abuse.

Most are made from aluminum since it is low cost, lightweight, and has excellent thermal properties. Some designs do not have a discrete heat sink device, but use copper of the PC board as the heat sink or "heat spreader". Heat is conducted away from the IC through its leads, or via a thermal "pad" that some ICs have on their underside. (Of course, this removed heat energy then becomes affects the rest of the PC board and ICs, and so may aggravate the heat status of other components.)

It's important to make sure there is airflow (natural convention or otherwise) past those fins, or else the effective of the heat sink will be greatly reduced. It's important to ensure good thermal conductivity between the device to which the heat sink is attached and the sink itself; even tiny voids in the surface mating between those two can greatly increase the thermal impedance. For this reason, almost every heat sink assembly uses thermally conductivity layer between source and sink, usually a compliant pad or semi-solid adhesive. A heat pipe removes heat via phase transformation of a working fluid between liquid and vapor states, and is entirely passive.There are cases where the airflow path past the heat sink to the "outside" is obstructed, so some other passive technique must be used to get the heat away from a component. Part of the solution may be a heat pipe, a passive, low-cost, reliable way to move heat from a warmer point to a cooler one. This is a simple, clever device based on basic physics principles. The sealed pipe contains a wick and a working fluid. The fluid constantly transitions between fluid and gaseous state changes: at the heated end, the fluid vaporizes, and then travels to the cooler end where it returns to liquid state. In the process, it gives up the heat it acquired during vaporization.

To keep the non-heated end of the heat pipe cool so it can "give up" the heat it removed from the vaporized fluid, a heat sink or "cold plate" is attached (a metal plate which acts as a heat sink) through conduction and then convection. Again, heat energy must have an "away" to which to go.

Start Going Active, If You Must

The passive solutions have great benefits in terms of cost, reliability, silence, and simplicity. Unfortunately, there are applications where they fall short due to inadequate airflow, partially blocked airflow path, physical orientation of the circuit boards, or insufficient room for a large-enough heat sink.

The most common cooling solution is adding a fan for a forced air approach. The fan may be used by itself, but is often used in conjunction with the heat sink. Fans come in sizes as small as a large, fat coin, and operating from DC voltages as low as 3 V, and then moving up to 5 V, 12 V or more; in general, higher voltages not only support larger fans and more airflow, but also are more efficient at converting the applied DC power into moving air.

Many designers do not like using fans because they bring cost, noise, and reliability issues (they can fail, bearings can wear, or collect dust and so lose effectiveness). One improvement is to include a temperature sensor for closed-loop control the fan speed, making it proportional to the temperature in the system; this saves power, reduces noise, and extends fan lifetime.

If a fan can't provide enough forced airflow to keep the system below the rated maximum temperature, more advanced and costly active cooling solution can be used. These include uses of air conditioners as coolers, or liquid-based cooling where a heat-removal fluid circulates in pipes around the circuitry and especially around the heat sinks, to draw the heat away; the heat is then "dumped" elsewhere outside the core system. In some extreme cases, the entire circuit board is submerged in a non-conducting fluid which is pumped through to cool all components.

These fluid-based approaches are effective, but they are relatively expensive, require significant power, and can become unpleasant headaches when they start to fail or fluid starts to leak. They are a usually last-resort option, used only when passive or fan-based forced-air cooling is not enough.

How Much Cooling Do You Need?

How much cooling capability is needed is a function of how much heat is being generated, the maximum allowed temperature of the components and system, airflow rate, and many other factors. The primary parameter for fan airflow is cubic feet per minute (cfm) and there are basic equations and guidelines which relate system specifications to the required cfm rating required under "best case" conditions. Fortunately, basic thermal-physics analysis and simulation programs can model the heat-flow situation and provide reasonably accurate answers, especially at the component level. For example, an application note from International Rectifier shows elements of a thermal model of a MOSFET on a PC board, Reference 3.

The modeling situation is more complicated for enclosures, since the physical configuration has more elements and subtleties, including the thermal properties of the materials and surfaces, while the airflow path may be complex. Despite these challenges, programs such as Solidworks, FloTHERM from Mentor Graphics, or ComSol Multiphysics (just a few of the many on the market) can provide impressively accurate results using principles of computational fluid dynamics (CFD).

Simulation and modeling programs such as FloTHERM can give a detailed overview of PC-board "hot spots" via a thermal map, and how these can shift with changes in conditions, as shown by the reduction in temperature of the IC in the upper-left corner. (Source: Mentor Graphics)

Keep in mind that just thermal analyses do not have to be extremely precise, so a simplified thermal model is usually sufficient to get a good overview of the situation. What most engineers need to know is approximately much cooling capability is needed, and if the intended heat sink, air flow, and other approaches can provide it. After that, a safety factor can be added to account for model shortcomings.

Many of these tools also provide simulated thermal images which are useful to determine the overall temperature versus any localized hot spots which must be addressed, Figure 7. The thermal-analysis applications often come in multiple versions targeted different situations, each one optimized to model different configurations such as an IC die and its package, a packaged IC on a circuit board, a circuit board in an enclosure, or the overall enclosure.

Design engineers can't avoid issues of localized or system-level heating and potential overheating in most applications. Even as low-power design becomes more commonplace, individual components can be stressed. There are passive and active approaches to cooling which can provide needed relief. To meet the various (and sometimes conflicting) goals, the project's electrical and mechanical engineers must work closely to balance component choice, packaging, materials, size, weight, and may other factors.