Scientists at KIT and Karlsruhe University of Applied Sciences have developed hybrid sensors that combine measurement processes with data evaluation in order to detect smoldering fires at an early stage. They work by analyzing the plastic vapors that are released when the insulating cables overheat. 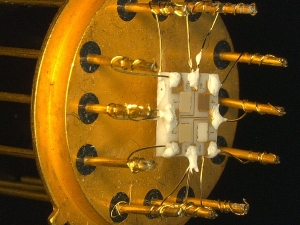 The sensor consists of four areas with different metal oxides and changes its temperature-dependent electric resistance when it comes in contact with gases. (Image: KIT/HsKA)

The hybrid sensors possess a gas-detecting sensor chip and the computational capacity and algorithms needed for evaluating measured data.

“The combination of a smart evaluation process with physical measurement is the basic idea of this development,” says Dr. HubertKeller, Simulation and Measurement Project Head of KIT’s Institute for Applied Computer Science.

Typically, a cable fire can be detected by noticing color change on the plastic coating, or smelling the burn. The newly developed hybrid sensors may be able to detect the risk of cable fires earlier, even before they are perceived by eyes and nose, by detecting the gases released from the plastic coating when heated. They can also identify and analyze the gas mixture and its concentration.

The sensors are also skilled enough to detect interfering gases like propene or carbon monoxide to exclude false alarms.

The hybrid sensors could lead to increased safety in cable ducts. In addition, since they can find gas mixtures and determine individual gas concentrations, they may also be useful for detecting toxic mold gases in food control, explosive gases in fertilizer silos, or leaks of natural gas pipelines. “Hybrid sensors can be used anywhere as separate systems or in a network. They may also be combined with classical safety technology, such as infrared cameras,” says Keller.

The team developed the sensor based on the fact that different gases react in different ways with gas-sensitive metal oxides as a function of temperature.

“The sensor array is heated cyclically and cooled down again. Simultaneous measurement of electric resistance or conductance yields four specific conductance signatures, the evaluation of which provides information on the composition and concentration of the gas,” says Professor Dr. HeinzKohler of the Institute of Sensor Technology and Information Systems of the Karlsruhe University of Applied Sciences.