Engineers from Purdue University have come up with a new system that allows a 3-D printer to create a functioning product with enclosed electronic and motorized components and customized devices such as a computer mouse molded to a user's hand.

In traditional 3D-printing, objects are created layer-by-layer from the bottom up, which can be challenging when printing overhanging or protruding features such as a figure's outstretched arms. In that case, they would have to be formed with the help of supporting structures that would later be removed in order to add time and material to the process.

In the new system, called RevoMaker, the need for supporting structures is reduced and a new technique for multidirectional printing is created. Revomaker is designed to eliminate the need for assembly since the printer simply creates right around the enclosed electronics. Different parts of the object are partitioned digitally and printed around a box that contains electronic and mechanical components. 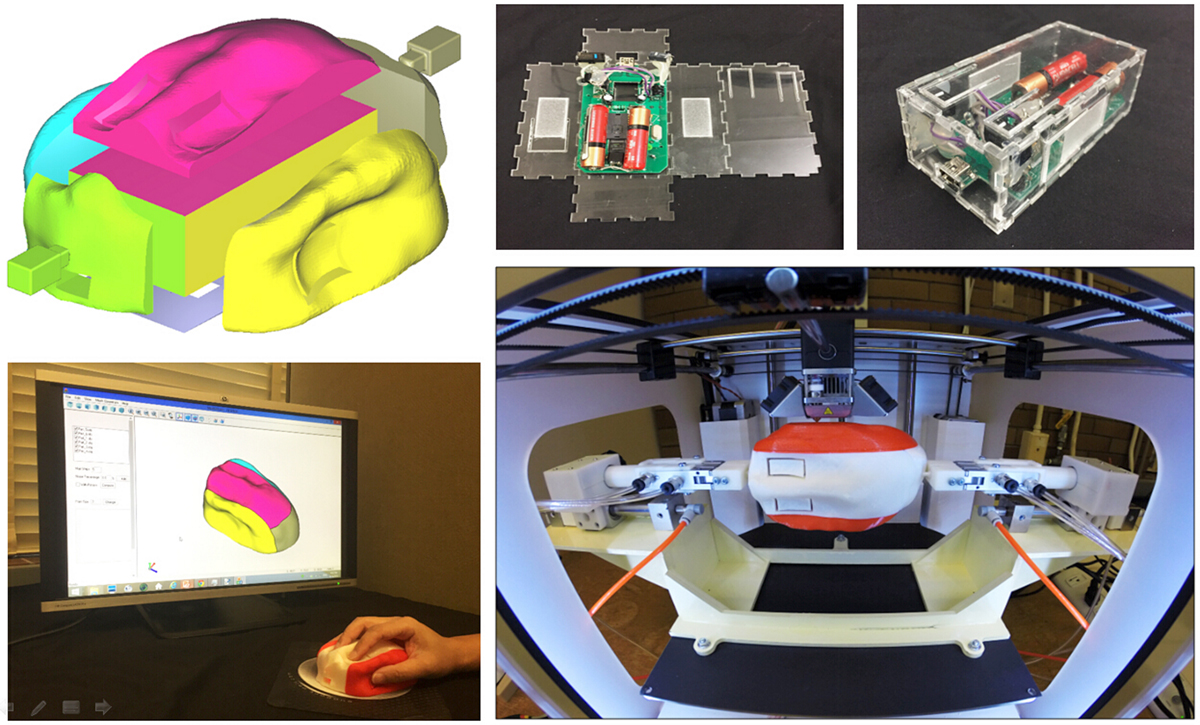 "With a traditional 3-D printer, you print on a planar print bed and the platform is fixed," says Raymond Cipra, a professor of mechanical engineering. "Our strategy is to replace the print bed with a laser-cut cuboid, which can be rotated about an axis to provide orthogonal printing surfaces on each side of the volume. This cuboidal volume is also the space into which the electronics, motors, batteries are embedded before the printing process begins. Perhaps you could have multiple cuboids that you snap together in a customizable fashion."

The team’s main focus was to enhance existing 3-D printers at minimal cost so that people don’t have to use a more complex and expensive multi-axis machine to make the parts they want. They accomplished this by rotating the cuboid and using the printer's own X, Y and Z-step control. The result was much greater functionality and capability to the process. The process also enables side-surface functionalities, such as push-buttons, that also interact with housed modules in a compact volume.

"The cuboid base is generated inside any geometric model using our cuboidization algorithm. As the whole model is partitioned by the base, the algorithm computes the cuboid with as large a volume as possible cuboid to save printing material and with optimized orientation to reduce the necessary supporting material,” says Yunbo Zhang, a postdoctoral research associate.

The plastic boxes could be shipped as flat templates and then unfolded and assembled in series to create a variety of products.

This method creates a more personalized approach to printing jobs and eliminates the mass-manufacturing process. The team envisions creating products at a local community store that are made from modules for only a small group of people.

The new system has been demonstrated by creating items with complex shapes, using different colors to show how the segments are printed separately, but in a continuous process as the piece is turned and repositioned. In one project, a mouse was customized to suit a person's hand by first creating a clay mold and then scanning it into a computer. The mouse was fully functional straight out of the printer. Another project they played with was a wind-up toy that had a spinning tail and glowing LED eyes.

Production time and the amount of material needed were reduced by as much as 37%, depending on the product, according to the research.

"Using our methods, we will soon be able to make things that actually walk out of the printer by themselves," says Ramani.

The research team developed both the hardware and software programming for the system.

However, the team has no immediate plans to commercialize the RevoMaker on the market any time soon. Instead, they view their findings as a step toward a more open community and platform.

"RevoMaker cleverly integrates several engineering innovations that advance the already incredible capabilities of additive manufacturing, making it more efficient and significantly easier to use by users of all ages," says Ed Morris, director of America Makes, the National Additive Manufacturing Innovation Institute. "Potential applications of these technological advancements are equally incredible, from the fun of making custom toys, to use as a dynamic teaching tool, to empowering those with physical disabilities to create their own functional devices that enhance their quality of life."