Particle accelerators are large machines that take up space, which can be inconvenient, especially when they are used for cancer therapy and medical imaging.

Physicists at the University of Maryland (UMD) have just made a discovery that could lead to inexpensive and portable particle accelerators in the near future. 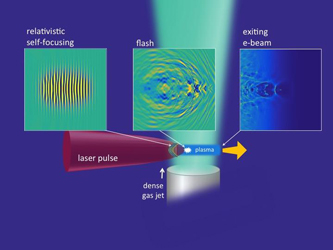 The laser-driven electron accelerator experiment at the UMD. Image Credit: Howard Milchberg/George Hine/UMD"We have accelerated high-charge electron beams to more than 10 million electron volts using only millijoules of laser pulse energy. This is the energy consumed by a typical household lightbulb in one-thousandth of a second," says Howard Milchberg, professor of Physics and Electrical and Computer Engineering at UMD. "Because the laser energy requirement is so low, our result opens the way for laser-driven particle accelerators that can be moved around on a cart."

"As an unexpected bonus, the accelerator generates an intense flash of optical light so short that we believe it represents only one-half of a wavelength cycle," Milchberg adds. These ultra-short light flashes could lead to the development of optical strobe lights that can capture the motion of electrons as they swarm across their atomic orbits—a potentially important development for materials science and nanotechnology.

The UMD team started the process with a technique called laser-driven plasma wakefield acceleration and then pushed it to the extreme. They shot a laser pulse into plasma, (in this case, hydrogen gas) that has been fully ionized to remove all the electrons from the gas atoms. An intense laser pulse can create a plasma wake that follows the laser, much like the water wake that trails a speedboat. A bunch of electrons following the initial laser pulse can "surf" the waves of this wake, accelerating to nearly the speed of light in millionths of a meter.

"Unless your laser pulse can induce the plasma wake in the first place—and it takes a very intense pulse to do that—you're out of luck," Milchberg explains. Prior efforts needed much bigger laser energies to accomplish this effect. So the team tried a different approach instead; forcing the plasma itself to transform a weak laser pulse into a very intense one.

The UMD increased the density of the plasma to as much as 20 times that used in typical experiments. In the process, they dramatically reduced the laser pulse energy needed to initiate relativistic self-focusing and thereby generate a strong plasma wake.

"If you increase the plasma density enough, even a pipsqueak of a laser pulse can generate strong relativistic effects," says Milchberg.

The UMD laser-driven accelerator produces a beam of electrons and radiation, including gamma rays, which can be used for safe medical imaging and other applications without the need for significant levels of radiation shielding outside the beam path.

The secondary effect of bright, extremely brief flashes of light is the result of the initial accelerations of electrons within the plasma wake, as they are accelerated from rest to almost the speed of light in less than 1 millionth of a meter.

"Such a violent acceleration means they radiate like crazy," Andrew Goers, a graduate student in Physics in UMD says. "As much as 3% of the initial laser radiation is emitted in the flash in a millionth of a billionth of a second."

The researchers’ discovery could play a significant role in ultra-fast medical and scientific imaging, overcoming the biggest barriers to laser-driven acceleration: cost, complexity and portability.

"We may have found a solution to overcome all three of these barriers," Milchberg says.