Arduino fans rejoice! Sporting high-performance 32-bit MCUs, the latest crop of Arduino boards is ready to take on even your most ambitious projects. Although they deliver over 100X more processing power than the 8-bit Atmel AVR MCU (AVR Datasheet and Inventory) in the original Arduino board, they still retain most of the elegance of design, ease of use and open-source architecture that made the original Arduino platform, and its many variants one of the pillars of the Maker movement.

Since Atmel's elegant 8-bit AVR MCUs have been an integral part of the Arduino ecosystem since the beginning, it is no wonder that many DIY-ers have eagerly awaited boards equipped with its ARM-based successors. Kicking off the tour of the newest additions to the Arduino family with a look at a couple of boards equipped with Atmel's 32-bit SAM MCU architecture. 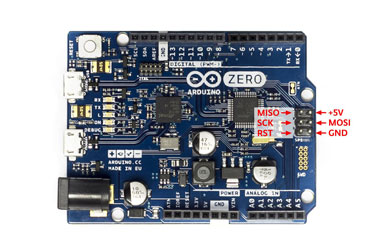 The Arduino Zero board.The Arduino Zero is a simple and powerful 32-bit extension of the platform established by Arduino UNO. It contains everything needed to support the microcontroller, allowing you to get started by simply connecting it to a computer with a micro-USB cable.

The Zero is compatible with all Arduino shields that work at 3.3V andF are compliant with any board, which follows the pinout of the Arduino Uno R3 board. Commonly referred to as the Arduino 1.0 pinout, it defines the location of Digital pins 0 to 13 (and the adjacent AREF and GND pins), Analog inputs 0 to 5, the power header, ICSP header and the UART port pins (0 and 1).

The Zero board is powered by Atmel’s SAMD21 MCU that features many advanced capabilities including:

The Zero also supports Atmel’s Embedded Debugger (EDBG), which provides a full debug interface without the need for additional hardware.

The Arduino Zero is available for $49.

The Arduino Due board is based on the Atmel SAM3X8E ARM Cortex-M3 CPU running at 84MHz. It contains everything needed to support the MCU; simply connect it to a computer with a micro-USB cable or power it with an AC-to-DC adapter or battery to get started.

The Due is compatible with all Arduino shields that operate at 3.3V and are compliant with the 1.0 Arduino pinout. It has 54 digital input/output pins 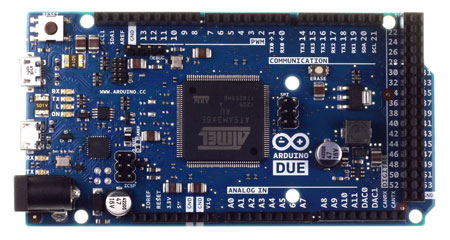 The Arduino Due board. (of which 12 can be used as PWM outputs), four UARTs (hardware serial ports), a 84 MHz clock, an USB OTG capable connection, two DAC (digital to analog), two TWI, a power jack, an SPI header, a JTAG header, a reset button and an erase button. Its most significant features include:

The Arduino Due is available for $49.

Atmel is only one of several major MCU makers to take advantage of Arduino's widespread popularity and rich ecosystem. Many companies, such as STMicro and Infineon have followed Atmel's lead and offer boards featuring their own ARM-based processors. Other manufacturers have chosen to use the Arduino ecosystem as a vehicle to showcase their own unique processor architectures.

Microchip Technologies for example, has collaborated with Digilent to create the Wi-Fire board, which is based on its 200 MHz, 32-bit Microchip PIC32MZ2048 MCU. The MIPS-based processor is loaded with 2-MB of on-chip flash memory and 512K of SRAM. In addition, this pin-compatible Arduino variant sports an integrated MRF24WG0MA 802.11b/g Wi-Fi module (also from Microchip).

The board also features: 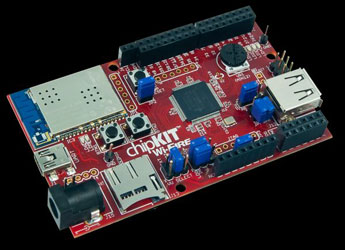 One of Wi-Fire's primary missions is to serve as a simple development platform for Internet of Things (IoT) applications. To this end, it has been paired with Imagination Technologies' Flow Cloud service development tools. Together, they make creating cloud-powered embedded applications much easier for the average developer. The development environment allows you to get started on your IoT application by pointing whatever PC, Mac or Linux box you are using to the FlowCloud Developer site. From there, you use the FlowCloud SDK to create your cloud application from FlowCloud's modular infrastructure capabilities and underlying services. At present, the available services include:
• Device and user management
• Asynchronous messaging
• Data storage
• Event logging
• International E-wallet payments
• Optional FlowRadio and music services
• A customizable website

The WiFire board is priced at $79. Users can get started with FlowCloud for the chipKIT WiFire.

STMicro's Arduino-compatible STM32F7 Discovery Kit is another exciting tool for DIY-ers interested in creating IoT applications. The board and associated development tools make it easy and affordable for both "mainstream" embedded developers and Maker/DIY-ers to get their hands on the 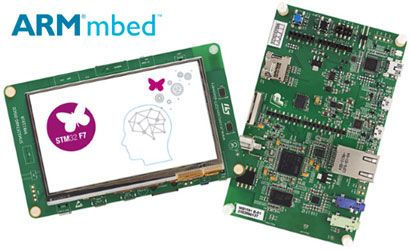 STM32F7 microcontrollers are built around the new Cortex-M7 core that has about twice the digital-signal processing (DSP) capability of earlier Cortex cores. The M7 is also the first Cortex-M core to feature on-chip cache, and is capable of ultra-fast data transfers and high-performance execution from embedded Flash or from external memories such as dual-mode Quad-SPI. The STM32F7 also includes 1MB of Flash, 340 Kbytes of RAM and an array of advanced I/O, making it ideal for applications requiring high-speed or multi-channel audio, video, wireless, motion recognition, or motor control.

The Discovery Board's features include:

Priced at $49, the STM32F7 discovery kit is available from STMicro. 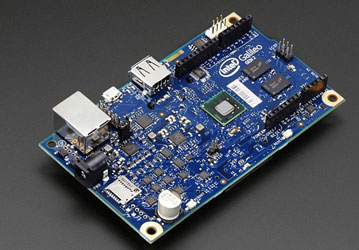 The Intel Galileo Gen 2 development boardEven Intel has gotten on the Arduino bandwagon. Their Galileo Arduino-compatible development board is based on the Intel Quark SoC X1000 Application Processor, a 32-bit Intel Pentium-class system on a chip. It is the first board based on Intel architecture designed to be hardware and software pin-compatible with Arduino shields, which support the Arduino 1.0 pinout (as defined by the Uno R3).

In addition to Arduino hardware and software compatibility, the Galileo board has several PC industry standard I/O ports and features to expand native usage and capabilities beyond the Arduino shield ecosystem. This includes:

The Arduino Galileo board is available for $79.