Shipments and new orders of semiconductor equipment increased in January compared to January 2014 as the book-to-bill ratio improved to 1.03 from 0.99, according to the trade association SEMI.

The three-month average of semiconductor equipment billings (shipments) in January 2015 was $1.28 billion, 3.5 percent increase from January 2014 when billings were $1.23 billion. Billings in January were 8.6 percent lower than December 2014 level of $1.40 billion, according to SEMI. 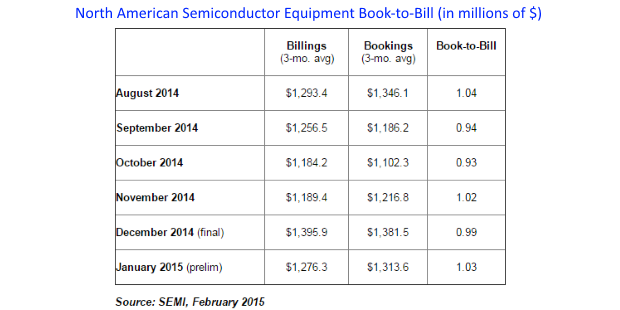 The semiconductor equipment book-to-bill ratio in January was 1.03, up from 0.99 in December. A ratio of 1.03 means that equipment manufacturers received $103 in new orders for every $100 of orders that they shipped in the month. Anytime the ratio is above 1.00 it means business is improving.

SEMI president and CEO Denny McGuirk said 2014 was a strong growth year for the semiconductor equipment industry and both bookings and billings at the start of 2015 were comparable to the early 2014. "Given the positive outlook for the semiconductor industry in 2015 and based on current capex (capital expenditure) announcements, we expect the equipment market to continue to grow this year,” he said

The SEMI book-to-bill is a ratio of three-month moving averages of worldwide bookings and billings for North American-based semiconductor equipment manufacturers.

Consolidation Heats Up In Chip Industry