Taiwan Semiconductor Manufacturing Corp. (TSMC) released its third quarter earnings of $6.88 billion (New Taiwan dollars $209.05 billion), a new record for the company thanks to a boost by the company’s ramp of 20nm wafers.

Revenue increased 14.2 percent sequentially and 28.6 percent year-over-year with a gross margin of 50 percent, the highest since 2006, according to the Hsinchu, Taiwan-based company.

“After two years of meticulous preparation, we began volume shipments of 20nm wafers,” Ho said. “Revenue contribution went from 0 percent in the second quarter to 9 percent of the third quarter revenue. This is the fastest and most successful ramp for new technology in TSMC history.”

Ho said that customer demand for 28nm wafers continues to be strong. Combined revenue from 28nm and 20nm wafers during the third quarter rose to 43 percent, up from 37 percent one quarter ago, as shown in Figure 1. 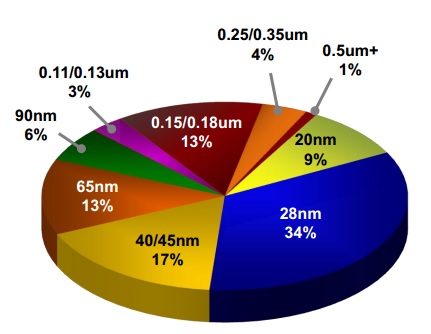 TSMC's manufacturing revenue by nanometer for the third quarter.

In terms of the outlook for the fourth quarter, TSMC expects revenue to rise to between NT$217 billion and NT$220 billion that will translate to 4 percent to 5 percent quarter-on-quarter growth. Ho said that gross margins will be between 48 percent and 50 percent with operating profit margins to be between 38 percent and 40 percent.

Ho said that the lower margin rate is because of TSMC’s ramp of 20nm to more than 20 percent of the company’s wafer revenue in the fourth quarter. “We expect to see a mild margin dilution without our aggressive productivity efforts,” she said.