Pushing the Limits of Wi-Fi

As good as 802.11n is, the latest version of Wi-Fi — 802.11ac — takes wireless communications to a new level. The standard took nearly half a decade to reach fruition, but the results prove that the time was well spent. The protocol provides gigabit speed, greater bandwidth, support for more clients per access point, and higher energy efficiency for the devices it serves. While chipsets capable of delivering the features and performance of 802.11ac are still in development, access points based on draft versions of the standard have already entered the market. Wireless system providers expect to introduce a second wave of products compliant with the ratified standard early in 2015. These will sport optional features that boost performance even further than the initial implementations.

The improvements introduced by the new standard do not spring from any single technology. Instead, the specification combines the elements that made 802.11n successful and enhancements such as new modulation, channelization, and signal processing techniques. According to Shravan Surineni, Senior Product Marketing Manager, Qualcomm Atheros, the objective of all these improvements is “to provide a seamless experience to all Wi-Fi users so that they can have full-environment coverage and be able to support whatever bandwidth their carrier provides.” 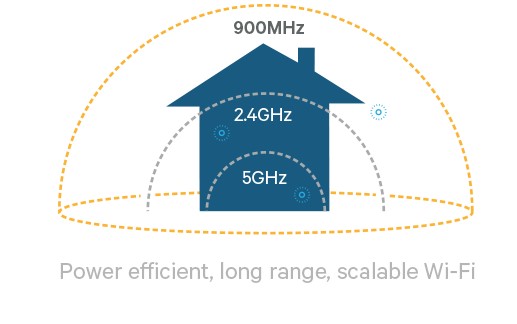 The combined services of the Wi-Fi standards promises to provide comprehensive network coverage over a broad range of applications. (Courtesy of Qualcomm Technologies.)

To achieve significantly better bandwidth than previous generations of Wi-Fi, the IEEE standards body selected the 5 GHz spectrum for the operating frequency of 802.11ac, eschewing the 2.4 GHz band because it has only 83 MHz of spectrum available. Use of the 5 GHz range allows the new standard to adopt 80 MHz and 160 MHz channels. Larger channels mean higher data rates. 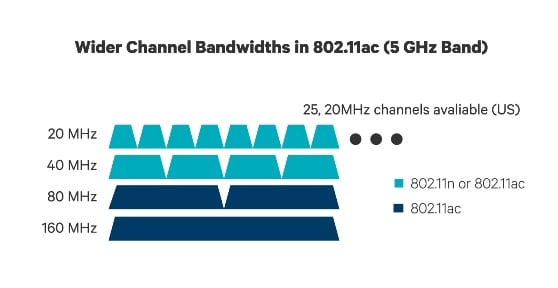 “With each doubling of the channel bandwidth, you can achieve twice the data rate,” says Greg Ennis, Vice President, Technology, Wi-Fi Alliance. “Going from the 40 MHz channelization available with 802.11n products to 160-MHz-wide channels represents a four-fold bandwidth increase, and that translates to a four-fold increase in the raw signaling rate.”

The move to the 5 GHz band offers other benefits. Using this part of the spectrum avoids much of the interference created by devices ranging from cordless phones and Bluetooth headsets to baby monitors and microwave ovens, which can degrade signals in the 2.4 GHz band.

Operating at the higher frequency does have a downside, however. The range of 802.11ac systems decreases when they have to operate in environments that contain walls and other obstacles.

Another technique used to increase bandwidth is channel bonding. The IEEE first introduced this function in 802.11n. The technique essentially creates data-only channels wider than those found in previous versions of Wi-Fi. The technique “borrows” bandwidth from adjacent channels to create a bigger channel, potentially doubling throughput.

Channel bonding does have a drawback. Wider channels are more susceptible to signal interference. Unless this is compensated for, a system’s transmission range and signal quality are reduced. 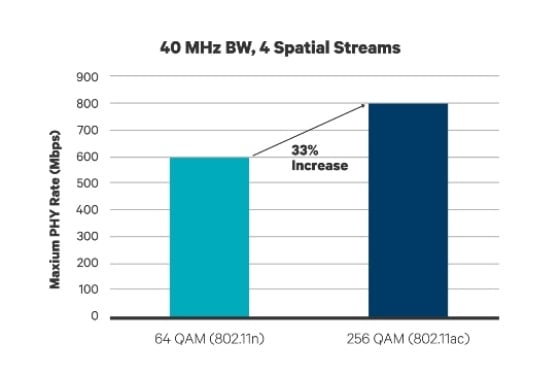 While higher-order modulation increases efficiency, it also only works well when the signal chain has a high signal-to-noise ratio, which mandates more power and better transceivers at both ends of the link. As modulation complexity increases, range can decrease. Products using 256 QAM can expect to transmit reliably only from 10 to 20 m, and this will require the right environmental conditions.

The jewel in 802.11ac’s crown of technological innovations is multi-user multiple-input, multiple-output, or MU-MIMO, which enables access points to communicate with multiple clients simultaneously. The beauty of MU-MIMO is not just broader, targeted coverage, but also higher data rates and greater efficiency. “802.11ac’s multi-user MIMO uses available bandwidth much more effectively than other versions of Wi-Fi,” says the Wi-Fi Alliance’s Ennis. 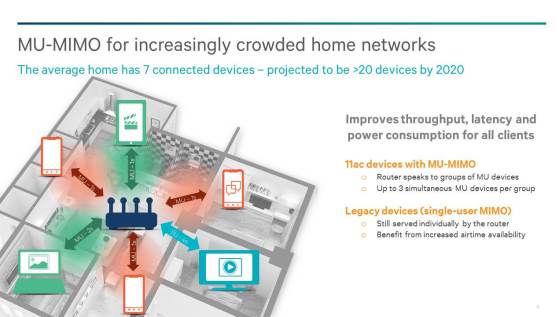 The foundation of multi-user MIMO is transmit beamforming, a technique that uses antenna arrays to dynamically adjust access point transmissions, potentially on a frame-by-frame basis. Beamforming optimizes transmissions by measuring the channel to determine how best to use the signal values and transmit power to reach the client device. The process begins by measuring the channel between the two ends of the link in a calibration process called “sounding.” The access point initiates the sounding, exchanging frames with the client to measure the channel. The result is a mathematical description of the best way to direct transmitted energy toward the receiver, indicating how to best set up each element of the access point’s antenna system to achieve the optimal range and signal strength. After the channel measurement, the access point transmits spatially focused frames to the client, and the client acknowledges receipt of the data.

802.11ac beamforming increases the number of antennas and spatial streams from the four found in 802.11n to eight, achieving data rates as high as 6.93 Gbps and gain between 2 dB and 5 dB, with the best results in mid-range transmissions.

With all of these performance improvements, 802.11ac promises to move Wi-Fi closer to being able to provide complete environment coverage, but some applications call for levels of performance that the standard simply cannot deliver. This is where complimentary protocols like 802.11ad and 802.11ah come into play.

802.11ad uses the 60 GHz band, which offers a huge amount of spectrum, allowing the use of 2 GHz wide channels. Channels this wide deliver data rates as high as 7 Gbps, making it ideal for fast, short-range wireless networks.

The standard serves such applications as docking and synchronizing video from mobile devices to TVs. “The advantage of this fast, short-range transmission technology is that it offers an alternative to HDMI cable [high-definition multimedia interface] to transmit an HD video,” says Qualcomm’s Surineni.

There are, however, limitations to its performance. Its extremely short waves usually cannot penetrate walls and other structural barriers.

802.11ah, on the other hand, operates at the other end of the spectrum in the 900 MHz frequency band. The standard promises a range of throughput, from 150 Kbps over a 1 MHz band to as much as 40 Mbps with an 8 MHz band. Leveraging the improved propagation capacity of 900 MHz radio waves, it extends the range of Wi-Fi beyond the limits of 2.4 and 5 GHz and enables signals to penetrate walls and obstructions.

One of the standard’s best features is its ability to support battery-powered sensors. Its 150 Kbps minimum data rate enables short bursty data packets, which reduces the devices’ power requirements.

These features make the standard a potential competitor of Zigbee and Z-wave in areas such as building and home automation, and they position it well for applications such as cellular offloading, sensor networks, machine-to-machine communications, and wearable electronics.

The IEEE probably will not ratify 802.11ah until January 2016. Chips and systems based on 802.11ah specifications, however, could arrive on the market as early as 2015.

These new versions of Wi-Fi are all about meeting expectations. Paradigm shifts like the mobile revolution, Internet of Things, and smart home manifest themselves in the form of greatly increased network traffic. Analysts predict a four-fold increase in streaming video traffic by 2018, supported by media devices such as Apple TV, Roku, Google Chromecast, and Amazon Fire. In addition, connectivity gurus anticipate the Internet of Things will encompass as many as 26 billion identifiable objects by 2020. All these technologies, however, demand more bandwidth and support of burgeoning populations of connected devices than previous versions of Wi-Fi. 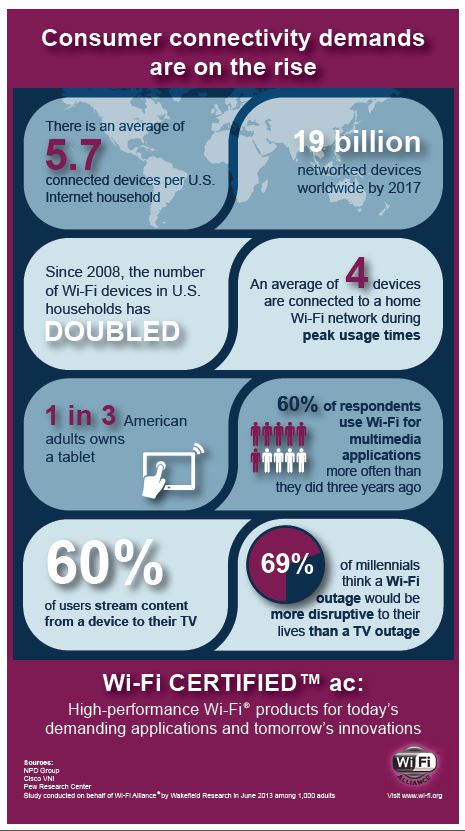 IEEE standards 802.11ac, ad, and ah provide the breadth and flexibility to accommodate the explosive bandwidth demand driven by trends like the mobile revolution, Internet of Things, and smart home. (Courtesy of the Wi-Fi Alliance.)

“No matter how much network capacity a standard provides, it is never enough,” says Matthew Gast, Director of Advanced Technology at Aerohive Networks and author of “802.11ac: A Survival Guide.” “These standards aim to increase network speed and make networks function better when you go from a world when everybody has a laptop and a phone to a world where everyone has a laptop, phone, tablet, and maybe a watch — where you monitor and control building lighting and environmental systems using a mobile device.”

Wi-Fi has already carved out a niche in the infrastructures that will enable these emerging connectivity trends. Enterprise, industrial, and consumer end users already have extensive experience with Wi-Fi and are familiar with the technology. Because desktop, mobile, server, and even embedded computing platforms already have TCP/IP stacks, connecting to Wi-Fi networks is essentially an automated process. Wi-Fi developers have further solidified the standard’s place in the IoT’s with end-to-end security, using Secure Socket Layer and encryption technologies.