Chip Sales up for 5th Straight Month in July

July sales imp[roved on a sequential basis across all regions tracked by the WSTS, including Japan (7.9 percent), the Americas (5.4 percent), Asia Pacific (1.2 percent) and Europe (0.3 percent), the SIA said. 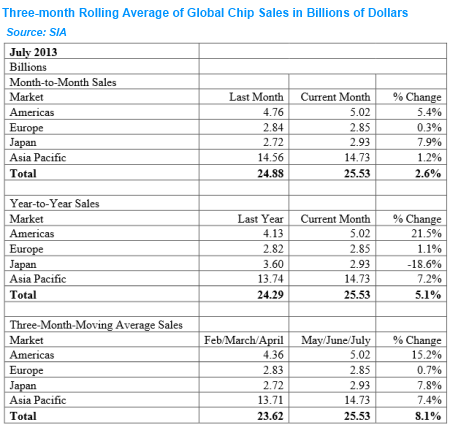 In its report on the industry’s growth, Brian Toohey, president and CEO, emphasized two programs the SIA called for initiatives to strengthen the semiconductor industry. Besides taking meaningful action on immigration reform, “Congress also must swiftly approve legislation to secure the supply of helium gas that is needed for semiconductor manufacturing and a range of other applications, before an Oct. 7 deadline, when a key source of helium—the Federal Helium Reserve—is scheduled to go offline to industrial and scientific helium users.”

The House has passed H.R. 527, the Responsible Helium Administration and Stewardship Act, in April. Reconciled with the Senate’s S.783, the Helium Stewardship Act of 2013, the legislation would help ensure a steady stream of helium supplies.

According to the SIA, the U.S. established the Federal Helium Reserve in the 1920s at that time due to its strategic importance to the military. The Reserve now holds about 30 percent of global helium supplies. The Reserve scheduled to stop supplying private entities next month creates a shortage of reliable helium supplies in the U.S. and has resulted in dramatic price increases over the past several years. The helium supply shortage also has caused significant uncertainty in important industrial sectors and the research community, where currently there are no substitutes for helium.