It's not news that the applications for rechargeable batteries based on variations of lithium-ion (Li-ion) chemistry are growing rapidly. This growth is at the expense of older technologies, including sealed lead acid (SLA), nickel metal hydride (NiMH) and nickel cadmium (NiCd) cells, but is also responsible for the increase in the overall rechargeable battery market itself.

Case in point is the global market for motive batteries—of which Li-ion is one—used to power electric and other vehicles. The motive batter market is forecast to reach $47 billion in 2017, up more than 50 percent from $31 billion this year, according a new report entitled “Motive Batteries - World -2013,” published by IHS and reported in Electronics360 last month.

“The rapid growth of the motive battery market is projected to be driven by an explosion in demand for EVs and the continued adoption of start-stop vehicles,” said Thomas McAlpine, market research analyst for power supply and energy storage at IHS.

The reason for the strong growth is that Li-ion cells offer two key advantages over other chemistries. First, and depending on the specific Li-ion chemistry and form used, these cells deliver between three and 10 times the energy density by volume and by weight compared to other formulations—a huge advantage in many applications. Their energy density by weight is impressive at 100 to 150 Whr/kg (360 kJ/kg to 540 kJ/kg), while corresponding energy density by volume is 350 Whr/L to 420 Whr/L (1.25 MJ/L to 1.5 MJ/L). Second, Li-ion batteries and packs require no maintenance, can be recharged for thousands of cycles and have a modest self-discharge rate of just 2 to 5 percent per month.

Despite the well-publicized travails of the Boeing 787 Dreamliner and its batteries, the benefits of Li-ion are significant and worthwhile, as long as the situation is properly managed. The market has expanded far beyond notebook PCs and their standardized cells grouped in multiple-cell packs. Much of the growth is coming from HEVs and EVs, as well as electric scooters, higher-end medical instrumentation, specialty instrumentation, autonomous robots and even tablet computers. Many of these applications require custom battery packs tailored to fit the electrical needs and available-space constraints of the product.

While this growth is a bonanza for battery vendors, it is also a boon for a subset of semiconductor companies. That’s because all rechargeable cells need some sort of regulation and control for charging. The fact is, Li-ion batteries need much tighter, close-in management than other chemistries.

The Li-ion opportunity for IC vendors has two major aspects: battery charge management and authentication. Looking at the first area, the charging sequence for Li-ion chemistries is more complex than for the others. The charge rate must be carefully controlled versus the battery charge level, which requires precise measurement of the battery voltage and temperature. In general, Li-ion batteries must not be charged above 45 C (113 F) nor discharged above 60 C (140 F).

While temperature is easy to measure, the charge level for Li-ion batteries is not, as one of their virtues also hinders the assessment of charge level: the terminal voltage is fairly constant regardless of charge, until the battery nears empty. Therefore, a precision voltage measurement subsystem and A/D converter is needed, often accompanied by "coulomb counting" or "fuel gauging" circuits that actually measure electron flows into and out of the battery.

Further, these cells are usually used in series as part of multiple-cell packs to increase voltage from the nominal 2.4 V per cell. This often calls for special consideration via charge balancing where the voltage of each cell is adjusted slightly to compensate for production variations, which affect how they charge and discharge. It's another opportunity for specialty ICs.

Analog/mixed-signal vendor Linear Technology Corp., for example, lists over 100 charger-related parts in its standard roster. The vast majority is designed exclusively for Li-ion chemistry; there are also some more costly and complex charger ICs that are designed to handle all chemistries. For basic high-accuracy monitoring, the LTC2492 provides a precision coulomb counter, and delivers data on battery voltage and temperature via an internal 14-bit analog/digital converter. (See the diagram below). The three measured quantities—charge, voltage and temperature—are stored in internal registers accessible via the onboard SMBus/I2C interface. 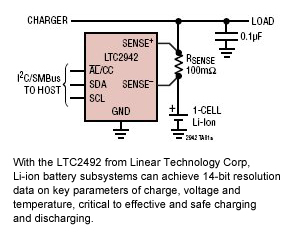 The second aspect of the Li-ion opportunity for IC vendors is product authentication. The high cost of replacement battery packs—whether justified or not depends on where you sit—means that there are many grey-market, counterfeit suppliers for some of the more popular packs used in longer-life products, such as those for medical equipment, tools and instrumentation.

Todd Sweetland, a marketing engineer at Electrochem Solutions, a leading Li-ion vendor, commented that despite their technical sophistication, it is easier to counterfeit a functioning Li-ion battery, albeit a substandard one, than an IC. And it is hard for the average user to spot a counterfeit battery, if they even care to look. Typically, consumers just plug the battery in their unit, turn on the device and if it works, everything is OK.

These counterfeits are often marked with a legitimate-source logo and branding, but they usually have far less charge capacity (run time), are built with marginal electrical connections and carry many other defects that mean substandard performance, early failure and even serious safety concerns.

To combat these counterfeit units, OEMs are working with IC vendors to incorporate authentication ICs into the battery packs and products. While basic authentication can be as simple as putting a serial number in the IC package, or a challenge/response protocol between the pack and the powered product, these techniques can be easily hacked and compromised at various points in the supply chain.

To lock out these counterfeits more effectively, sophisticated techniques such as high-security data-encryption algorithms are now being used. These are similar to those in automotive remote keyless entry (RKE) and use polynomial-based cyclic redundancy check (CRC) codes. Some methods go even further to hardwired, public key/private key encryption algorithms such as SHA-1.

At the high end, Texas Instruments offers the bq26100 for authentication of battery packs, ensuring that only those packs manufactured by authorized sub-contractors are used in the end application (see the diagram below). It embeds the SHA-1 hash function inside the widely adopted Hashed Message Authentication Code (HMAC) construction, with a unique 128-bit key stored in each bq26100 device, thus allowing the host to authenticate each pack with an extremely high level of confidence. This impressive amount of security and sophistication demonstrates that thinking "it’s just a battery" is, indeed, very naïve. 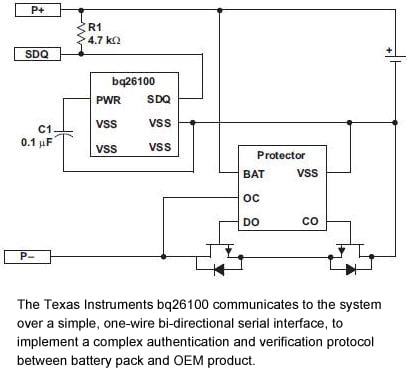