Bruce Rayner
The following is an overview of a teardown analysis conducted by IHS Benchmarking.
Sponsored by

Nokia’s ultra-low-cost handset designated the 105 weighs in at a modest $20 retail, which the company believes is the sweet spot for emerging markets around the world. The Finnish phone maker shows how to strip out the cost by sticking to a limited set of features and employing a highly integrated design.

The IHS Teardown Analysis Service team tackled the Nokia 105 to catalog the materials and components and determined that the phone maker was able to keep the price low strictly based on hardware and manufacturing costs and retail pricing.

The Nokia 105 carries a bill of materials (BOM) of $13.50. When the manufacturing cost is added in the cost rises to $14.20. At a suggested retail price of $20.00—a new low for a ULCH cellphone—this gives the 105 an implied hardware and manufacturing margin of 29 percent, which suggests a modest profit margin for the new handset.

The attached table presents a summary of the IHS teardown of the Nokia 105. This teardown assessment is preliminary in nature, accounts only for hardware and manufacturing costs, and does not include additional expenses such as software, licensing, royalties or other expenditures. 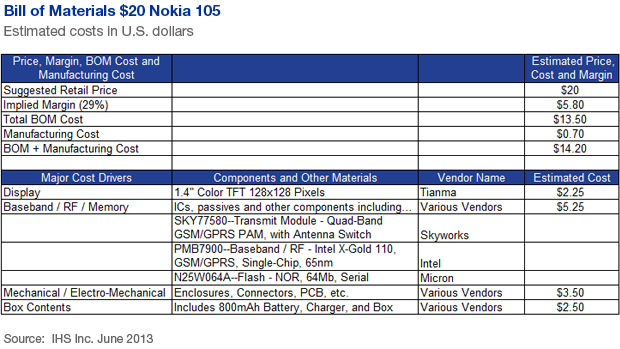 “About eight years ago, the IHS Teardown Analysis Team dissected the iconic Nokia 1110 cellphone, a hugely popular device that defined the ULCH segment and had very similar features as the new 105,” said Wing Lam, principal analyst for IHS.

“We determined that the 1110’s BOM was nearly three times larger than the 105’s—even when accounting for the black-and-white display used on the old model. Therein lies the 105’s secret: By keeping features the same for nearly a decade, the Nokia 105 can integrate nearly all system functions into a single chip, dramatically reducing the cost to produce a cellphone. The 105 allows Nokia to participate in the ULCH market targeting specific regions and consumers.”

Targeting the ultra-low-end allows Nokia to approach the 105’s design in a manner that is the polar opposite of the strategy commonly used in the mid- to high-end cellphone market. That is, instead of adding new features to the product each year while maintaining the same BOM costs and pricing, Nokia stripped the 105 of features to dramatically cut the price.

The 105 extends Nokia’s 1100 line and is targeting emerging markets including Africa, India and Latin America. The phone supports long talk and standby times, which are valuable in regions with poor power grids or frequent shortages of electricity. The features of the phone are very simple, with just talk and text capabilities.

“While much attention has been lavished on smartphones, the market for simple handsets remains very important to Nokia,” said Wayne Lam, senior analyst for wireless communications at IHS. “Non-smartphones, including ULCH cellphones like the 105, accounted for 90 percent of Nokia's shipments in 2012.”

Phone on a chip

In terms of design, the 105 owes its low costs to a single, highly integrated chip: Intel Corp.’s PMB7900. The PMB7900 combines baseband and the RF transceiver enabling GSM/GPRS functions. With so much functionality packed into a single device, the 105 contains only three integrated circuits in total—compared to six for the 1110.

“This is the fruit of nearly a decade’s worth of integration,” Wing Lam said. “By riding Moore’s Law and holding the line on features, Nokia has gone from six discrete integrated circuits (ICs) to just one core device plus two other ICs.”

The other two ICs in the 105 are the SKY77580 transmit module from Skyworks as well as a NOR flash device from Micron. Collectively, these three ICs dominate the baseband/RF transceiver/memory subsystem and, when combined with supporting passive components, carry a cost of $5.25, representing 39 percent of the 105’s total BOM. 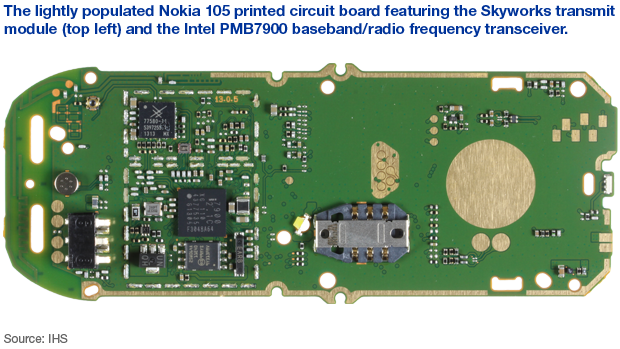 Nokia has kept this cost to a minimum by employing a TFT-LCD display with a low resolution of 128 by 128. This display technology is very mature and is available in high volume. In the individual 105 model examined by IHS, the display was made by China’s Tianma Microelectronics. But there are multiple suppliers of this component, with competition among them further contributing to keeping the price down. 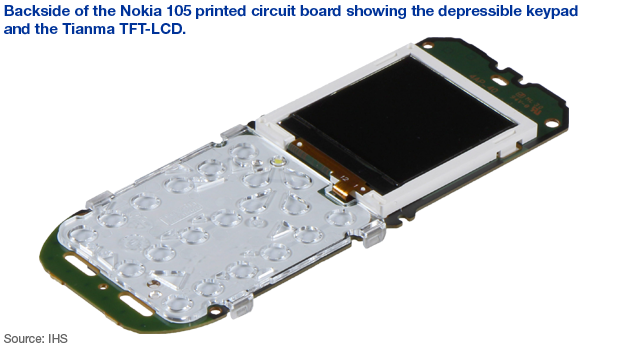 Below are images of the Nokia 105 casing and other materials. 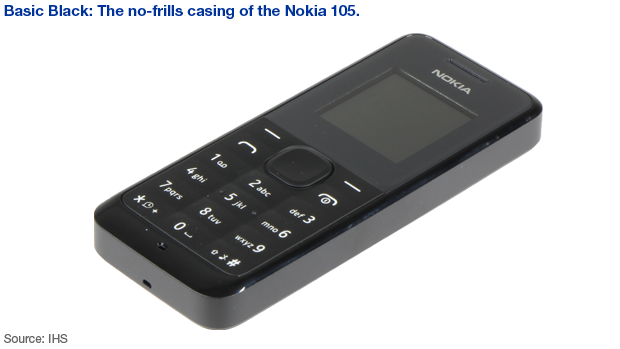 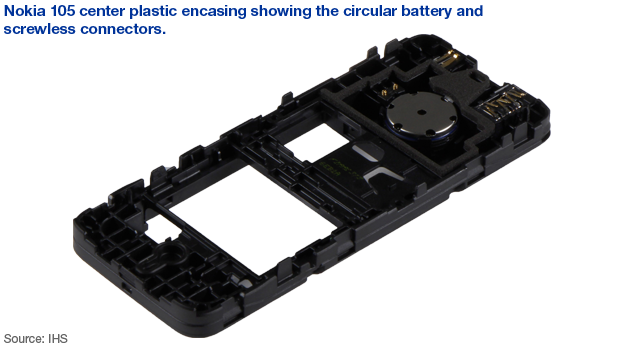 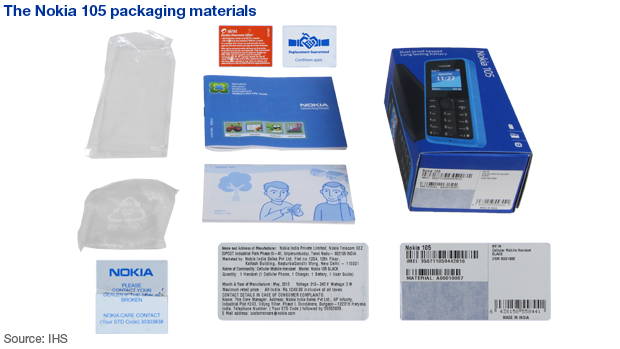