Survey: The growing use of vehicles as “third space” 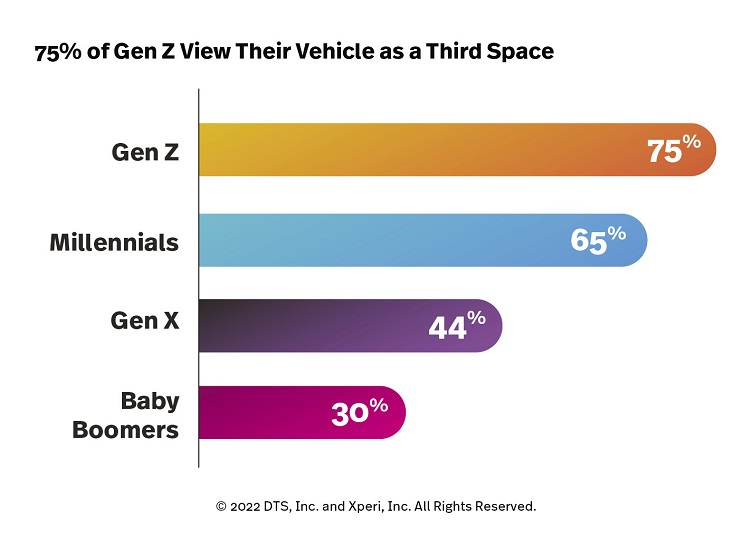 The respondents of the survey by age groups and how much they view vehicles as a third space. Source: DTS

More and more consumers are viewing the vehicle as a so-called third space, which is a space outside of work or the house where they can relax, escape stress and enjoy hobbies, according to a new survey from DTS, a subsidiary of Xperi Inc.

The survey shines new light on the growing importance of in-cabin features and functionality of vehicles as a space beyond just a transportation option but one where functionality is equally important.

The survey found that 75% of Gen Z drivers — those in the 18 to 25 age range — and 49% of drivers overall view their vehicles as a third space. It is called third space as the first space is the home and the second space is the workplace. In the third space, users would go to a park, library, coffee shop or other retail establishment and use the car to enjoy these places.

“Automotive has conquered the vehicle exterior, but the next evolution is all about solving the vehicle interior, especially its role as a third space,” said Jeff Jury, senior vice president and general manager, of the connected car at Xperi. “Consumers, especially younger drivers, are moving from viewing their vehicle as simple transportation toward seeing it as a space where they can relax and escape. This demands technology that can merge safety with a vehicle cockpit that meets their entertainment, comfort, personalization and wellness needs. It is the future of the connected car industry.”

Respondents of the survey found that their personal vehicles are more important today than ever before. They also view ridesharing as an important vehicle solution as well as a place for refuge. The survey also found users want more design choices, personalization and safety in vehicles as they are using them more for third space, Xperi said.

In terms of personalization, another rising statistic is personalization and health features inside a vehicle. Personalization, such as music choices, lighting, temperature, the vehicle knowing the occupants is growing in importance as well.