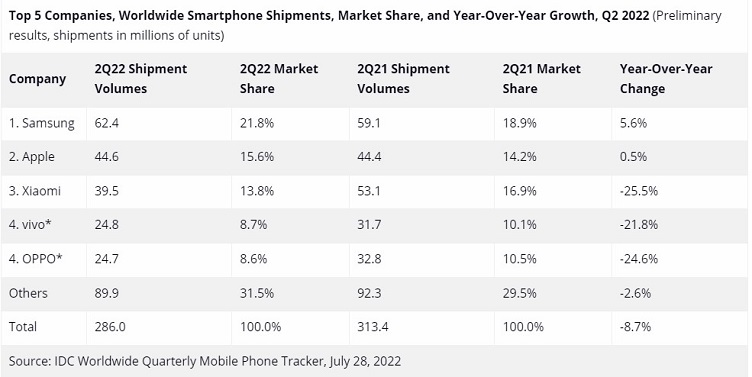 The top smartphone vendors globally and their share and shipments for the second quarter. Source: IDC

Global smartphone shipments fell 8.7% year-over-year in the second quarter of 2022 — the fourth consecutive quarter of decline — according to new research from International Data Corp (IDC).

Shipments fell to 286.0 million units, about 3.5% lower than what was originally forecast. IDC said the reasons for the decline included:

"What started out as a supply-constrained industry earlier this year has turned into a demand-constrained market," said Nabila Popal, research director with IDC's Worldwide Tracker team. “OEMs have cut back orders for the rest of the year with Chinese vendors making the biggest cuts as their largest market continues to struggle.”

Popal said IDC forecasts some pick up in demand from some regions toward the end of the year, but it will continue to likely be overall a tough year for smartphones.

Regionally, the second largest decline came in the central and eastern European sectors as the war in Ukraine continues to hamper the region. However, the largest decline on global volumes came from China, which declined 14.3% year-over-year. Asia/Pacific, which accounts for nearly half of all shipments worldwide, declined 2.2% in the second quarter. All other regions, except Canada, saw low-to-mid single digit declines.

Samsung continues to hold the top spot in smartphone shipments with a 21.8% share with Apple coming in second with a 15.6% share. Xiaomi came in third place at 13.8%, narrowing the lead between it and Apple, IDC said. Vivo and Oppo ended the quarter tied for fourth place with 8.7% and 8.6% shares, respectively.