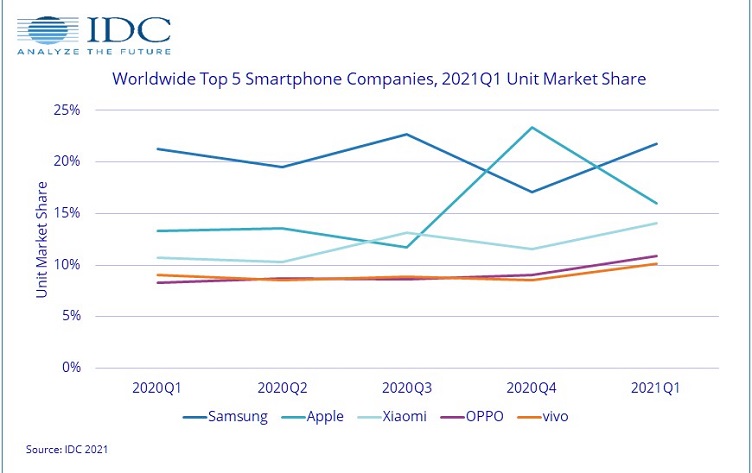 The market for smartphones is amid a recovery after years of declining shipments. The recovery continued in the first quarter of the year, rising 25.5% year-over-year in shipment growth, according to new research from International Data Corp. (IDC).

"The recovery is proceeding faster than we expected, clearly demonstrating a healthy appetite for smartphones globally,” said Nabila Popal, research director with IDC. “But amidst this phenomenal growth, we must remember that we are comparing against one of the worst quarters in smartphone history, 1Q20, the start of the pandemic when the bulk of the supply chain was at a halt and China was in full lockdown.”

Popal said that the growth is still very real, however. Compared to two years ago, shipments are 11% higher and this growth is coming from years of repressed refresh cycles with a boost from 5G.

“But above all, it is a clear illustration of how smartphones are becoming an increasingly important element of our everyday life – a trend that is expected to continue as we head into a post-pandemic world with many consumers carrying forward the new smartphone use cases which emerged from the pandemic,” Popal said.

For the first time in many years, Huawei dropped from the Top 5, suffering heavy declines due to U.S. sanctions among other factors. Overall, the smartphone market competitive landscape is changing with other Chinese vendors taking advantage of Huawei’s decline. Among these vendors Xiaomi, Oppo and Vivo all grew share over the last quarter resulting in a third, fourth and fifth place position with a 14.1%, 10.8% and 10.1% share, respectively.

Samsung regained the top spot in the first quarter with shipments of 75.3 million and 21.8% share. Samsung’s S21 series did well during the quarter. Apple was second overall with success of its 5G iPhone 12 series, shipping 55.2 million for 16.0% share, IDC said.

"While Huawei continues its decline in the smartphone market, we’ve also learned that LG is exiting the market altogether," said Ryan Reith, program vice president at IDC. "Most of LG's volume was in the Americas with North America accounting for over 50% of its volume and Latin America another 30%. Despite the vendor losing ground in recent years, they still had 9% of the North America market and 6% of Latin America. Their exit creates some immediate opportunity for other brands. With competition being more cutthroat than ever, especially at the low-end, it is safe to assume that 6-10 brands are eyeing this share opportunity."

The full research can be found in IDC’s Worldwide Quarterly Mobile Phone Tracker.