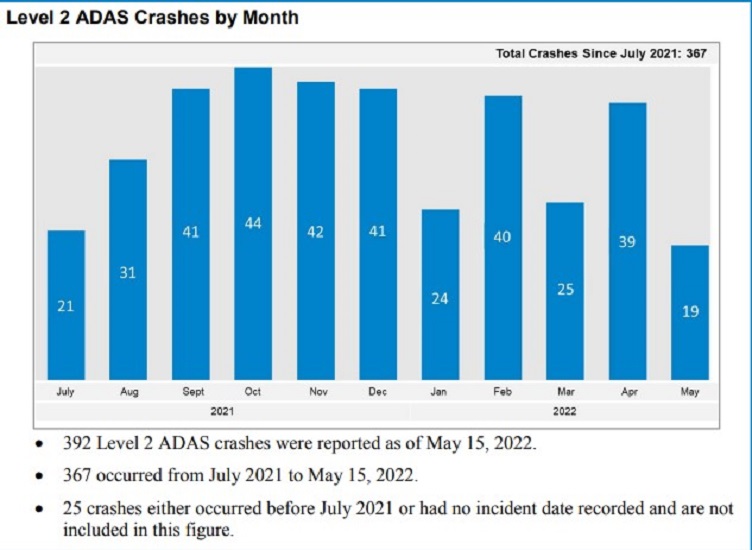 The crashes reported to the NHTSA by month during the reporting period. Source: NHTSA

The National Highway Traffic Safety Administration (NHTSA) has published its initial round of a so-called first-of-its-kind data on SAE Level 2 advanced driver assistance systems (ADAS) and autonomous driving systems (ADS) finding that 392 crashes were reported in the last 10 months.

“New vehicle technologies have the potential to help prevent crashes, reduce crash severity and save lives, and the Department is interested in fostering technologies that are proven to do so; collecting this data is an important step in that effort,” said Steven Cliff, an NHTSA administrator. “As we gather more data, NHTSA will be able to better identify any emerging risks or trends and learn more about how these technologies are performing in the real world.”

Of the SAE Level 2 ADAS accidents, one serious injury or fatality occurred in 11 of the 98 crashes that were reported and at least 116 of the collisions were with another vehicle.

According to a report from the New York Times, about 70% of the 392 crashes, or about 273, involved a Tesla vehicle using autopilot or the full self-driving beta technology. Honda cars were involved in about 90 incidents while Subaru models were involved in 10 incidents. Other vehicle manufacturers involved in accidents in the NHTSA report included Ford, General Motors, Volkswagen and Toyota with five incidents or less.

NTHSA said that the effort to document ADAS and autonomous crashes comes at a time when L2 ADAS functions are increasingly common on many new vehicles and provide assistance functions such as lane centering assistance, adaptive cruise control, braking and parking assistance.

However, this technology still requires that drivers must be engaged in the driving process at all times and are not designed to perform critical operating components of driving.

Meanwhile ADS-equipped vehicles can perform driving tasks in some circumstances but are generally limited for use on public roads around the U.S. and are used more frequently in pilot projects and testing. These tests and projects have been growing in popularity with ride hailing, shuttle services and deliveries.

Some of these projects include:

The data reflects crashes that automakers and operators reported to the NHTSA from the beginning of the reporting period in July. The data is not comprehensive but does provide information regarding crashes that have occurred with various levels of automated systems deployed at least 30 seconds before the crash.

The data was reported through May 15 and categorized based on what driving automation system was reported as being equipped on the vehicle, not which system was reported to be engaged at the time of the accidents. In some cases, Level 2 ADAS was mistaken for autonomous technology and vice versa, which the NHTSA said it is working to correct.