Stretchable film may be key to unlocking foldable smartphones 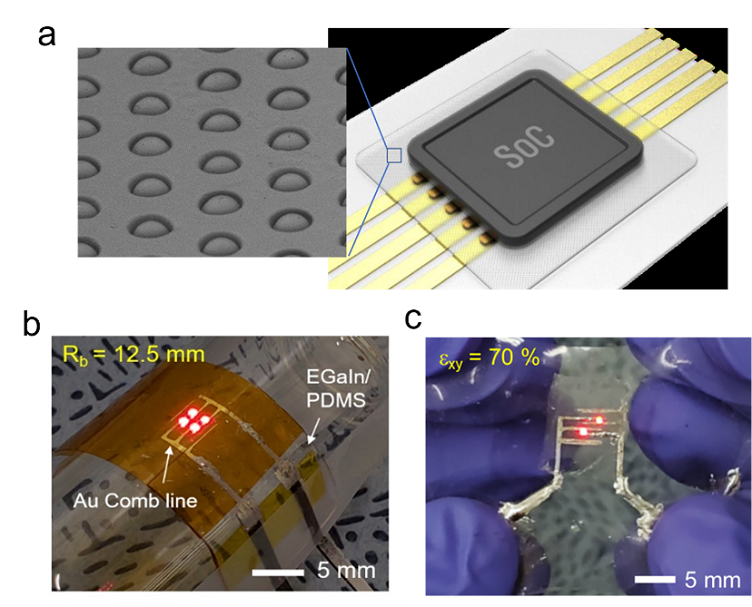 An image of the conductive film created by POSTECH (A) and the stretchable micro LED manufactured using S-ACF (B). Source: POSTECH

Foldable phones are coming with new announcements from Samsung, LG and others introducing smartphones with wraparound and extendable displays.

While the displays for these devices need to be deformable, the parts also need to be flexible. The core technology for an interface material that connects various parts is still not secured.

Researchers at Pohang University of Science and Technology (POSTECH) have developed a stretchable anisotropic conductive film (S-ACF) that can connect other electrodes physically and electrically regardless of the rigidity, flexibility or elasticity of the circuit line.

For stretchable displays, electronic skin and implantable devices, these must have a deformable circuit board. While these circuit boards can be formed into different shapes, there remains the issue of maintaining the physical and electrical properties even when the shape is altered.

The S-ACF was produced by arranging metal particles at regular intervals in SEBS-g-MA, an extensible block copolymer. These metal particles maintain a strong interfacial adhesion while securing stable electrical connection when its shape is changed via chemical bonding with the substrates.

“This film enables connecting devices with more complex structures in the future,” said Unyong Jung, professor at POSTECH. “I hope that it will serve as a launchpad for integrating and manufacturing stretchable devices — which have been independently studied — into one substrate and integrated system.”

Researchers found that the electrical and physical connection was formed when the S-ACF was placed at the contact interface between two substrates with mild temperature treatment in about 10 minutes.

The S-ACF can be patterned so that particles are arranged in a desired part, which increases the polymer contact surface in an area but does not require electrical connection to increase bonding strength. The film produced in this way adds stretchability to the conventional anisotropic conductive films for high-resolution circuits connection, low-temperature processing and production scalability, researchers said.