Stretchable, light-emitting film may be the future of wearables 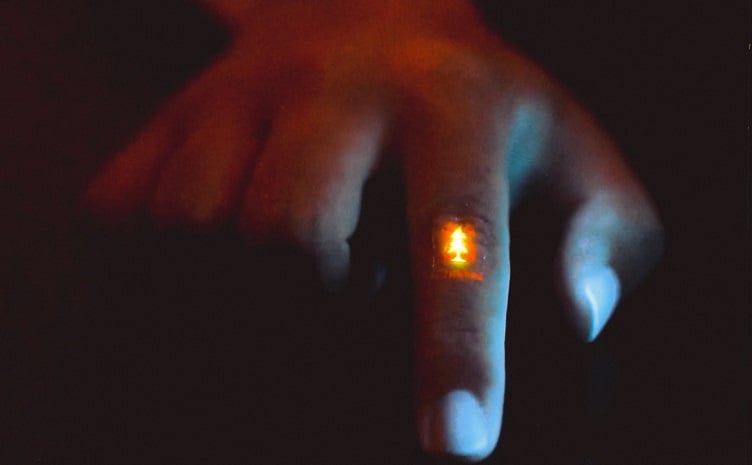 The method allows images to be created and allows users to interact with it. This could be the future of wearables that graft directly to the skin and are disposable once the battery runs out. Source: Stanford University

Researchers at Stanford University have developed a skin-like, soft, stretchable film that emits light to form a display that could reshape how humans interact with electronics.

The invention uses a method to produce a high-brightness elastic light-emitting polymer, which functions like a filament in a lightbulb. The film is made of stretchy polymers and has a brightness of at least two times that of a cellphone and can be stretched up to twice its original length without tearing.

“Stretchable displays can allow a new way of interactive human-machine interface,” said Zhenan Bao, the K. K. Lee Professor in the School of Engineering at Stanford. “We can see the image and interact with it, and then the display can change according to our response.”

The all-polymer film can be adhered to an arm or finger and doesn’t rip during bending or flexing. This could allow wearable trackers to have their display directly attached to the skin.

Researchers created the stretchable film by adding elastic insulating materials, such as rubber. But these additives decrease electrical conductivity and require the polymer to use a dangerous high voltage to generate even dim light.

Researchers discovered a yellow-colored light-emitting polymer called SuperYellow, which is soft and pliable but also emitted brighter light when mixed with a type of polyurethane.

The interconnected net of nanoscale fibers makes the SuperYellow stretchy and doesn’t inhibit electricity flow, which is key in the development of a bright display. Researchers were able to create elastic red, green and blue light-emitting polymers after this discovery.

With the polymers developed, the team had to layer the display together to match the high brightness and allow it to be stretchable.

For fabrication, the layers had to be stacked together so it would not degrade the brightness. The final display contains seven layers. These include:

When electricity runs through the display, one electrode injects positive charges into the light-emitting layer while the other injects negatively charged electronics into it. When the charges meet, they bond and go into an energetically excited state. The state then returns to normal by producing a photon, which is a particle of light.

“Imagine a display where you can both see and feel the three-dimensional object on the screen,” Bao said. “This will be a completely new way to interact with each other remotely.”