Smart clothing, otherwise known as e-textiles, may be in its infancy in terms of development and adoption, but cool things are still being played with and invented that can give us a look into the future of wearable tech fabric.

For example, take Purdue University’s project to harness human body heat and use it to power the energy for devices in the Internet of Things (IoT) or medical wearables markets. The research team was able to create a flexible thermoelectric generator that includes semiconductor strings woven into fabric. The generator is able to take heat from any type of complex surface it meets and convert it into a small amount of electricity. 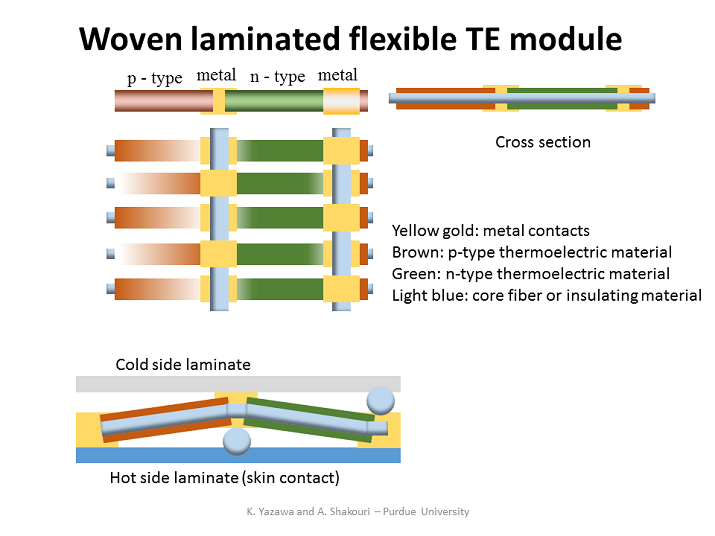 A diagram of how the semiconductor strings is woven into fabric to create a flexible thermoelectric generator. Source: Purdue University “The human body provides a significantly low-heat flux which requires thicker thermoelectric elements,” says Kazuaki Yazawa, research professor at Discovery Park’s Birch National Nanotechnology Center at Purdue University. “Optimum size should be larger than one inch in order to generate high power output. These characteristics limit the technologies use as it is very rigid and cannot effectively fit the three-dimensional form of the body.”

The semiconductor strings in the technology replace conventional thermoelectric generators making them more flexible and easier to manage. By lengthening the threads and using a combination of insulation, the generator becomes ideal for use in clothing or any shape that can be wrapped in a flexible fabric such as a chimney or coffee cup.

Yazawa says because the semiconductor strings harness the maximum amount of heat from the body (or other sources), it can provide power to IoT Devices. It might generate enough power to one day eliminate the need for batteries in these devices, he says.

Beyond IoT, heart monitors, respiration and perspiration monitors could be turned from bulky, uncomfortable devices to wearable blankets or clothes for the elderly. It could also be used to monitor a patient or athlete that is overheating to send real-time information on the vitals of the person to coaches or medical professionals.

As such, Yazawa says the technology could also be used to provide a cooling effect in these instances.

“Anything that takes heat and converts it to another form of energy is also providing a cooling effect. Therefore, this technology also could provide a continuous cooling treatment,” Yazawa says. “This could be especially beneficial from a sports or military perspective. The flexible substrate could be applied to undergarments and when athletes are running the technology could help give that little bit of charge.”